Age: 29
Job: Graphic Designer + Wrap Queen, Precision Signs (Garner, NC)
After work: Lindsey spends time with her family and her three-year-old daughter, who often accompanies Lindsey to work.
Quote to know: “I’ve always been a very creative person, which is why working in banking was a little difficult. This has been a nice change.”

CHELSEA LINDSEY’S BUSINESS card says “graphic designer” and “wrap queen,” but in reality, she is those and much more for Precision Signs. Lindsey is responsible for all of Precision’s design work – logo design, vehicle wraps and any type of signage. That’s a wide lane to operate in, considering Precision does banners; interior, exterior and ADA signs; and window, wall and floor graphics. Lindsey is also the go-to wrap installer and completes the majority of Precision’s printing. “I have a hand in everything,” she said. “It’s a family company, so I do quite a bit of the work.”

Lindsey’s parents, Laurie and Dan Peach, co-own Precision, and were able to lure their daughter away from her job as a member-service specialist at a bank. “(I was) very bored,” Lindsey said, “and my father decided to open his own company again. They needed somebody to do the designing and printing.” As a designer, Lindsey is partly self-taught and also self-educated through online courses and by reading small business design books penned by KickCharge Creative’s (Washington, NJ) Dan Antonelli.

She also went to wrap class, and believes her jack-of-all-trades position allows her to prevent potential pit-falls at the shop. “When people are designing and printing wraps and don’t have any of the installation experience, that’s when logos go in bad areas that you can’t read,” Lindsey said, adding she stays on top of her technique to ensure her wraps are built for longevity, because “it doesn’t really matter if it looks great the day I wrap it if it’s not going to look good after it’s been sitting outside for six months.”

A recurring side project is where Lindsey’s versatile skill set has really taken hold: designing, printing and installing helmet wraps for infants with plagiocephaly, a condition that causes babies’ heads to have a flattened appearance. This condition is treatable, and one of the methods is with an orthotic helmet. Lindsey started this practice a year and a half ago, and now receives around 20 requests a week. “I thought if I could wrap a car, I could wrap a helmet,” she said. “After I wrapped that first helmet, it took off like crazy.”

In the future, Lindsey wants to continue to improve her wrap game. “That industry and the wraps themselves are evolving – there’s new technology, new ways to make the wrap last longer, and more effective ways of wrapping,” she said. More courses and more training are on the table, with the possibility of taking over Precision down the line, too. 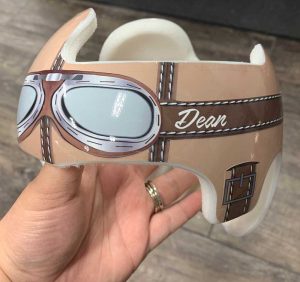 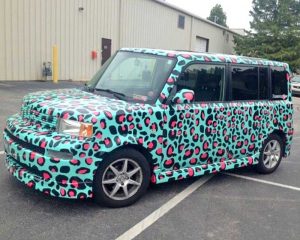 Signshop Becomes the Target of False Attacks on Yelp

35 of the Best Outdoor Advertisements You’ll Ever Find (Updated)

There Are Good Things About Crane Truck Sign Installations, and There Are Some Not-So-Good Things