A look ahead to the largest and most anticipated “friendly competition” to date.

THE THEME OF THE 2020 Sign Invitational — “Less is More” — applies to this creative contest among signmakers in so many ways. Now in its fifth year, one refinement of the rules reduced the maximum build size so that the projects could fit on 2 x 2-ft. display tables. The intention was to make the entries easier to carry or ship to the ISA Sign Expo in Orlando, FL, where the finalists will be on display in Signs of the Times’ booth (#235), April 2-4. Also, the thought was this change would encourage more participants, and it worked — a record 10 sign companies have thrown their hats in the ring.

“It’s hard to believe that it has been [11] months since we were in Las Vegas at the ISA show,” said Dan Sawatzky of Imagination Corp. (Chilliwack, BC, Canada) , the defending champion known for obsessing over his entries. “I did my first quick sketch of this year’s entry there at the show and got to work on the start of building it less than a week later.” His project, “The Snapper,” pays homage to signpainters of old, who used to travel from town to town, “snapping” signs. “Since then, each week, I would do my best to put in at least a little time crafting this year’s much smaller, but more detailed piece. The theme rings true… less is more!”

Founded five years ago by Sawatzky and co-enthusiast Jim Dawson, owner of Synergy Sign & Graphics (Strasburg, OH) , the Sign Invitational’s mission is “to foster involvement and creativity in the sign industry,” as stated on the competition’s website. It’s fair to say they have achieved that goal, as the creativity on display for the last several years has literally stopped thousands of Sign Expo attendees, and prompted them to ask, “How did you do that?” Past creations have mimicked an old-time gas pump , featured a magnetically levitating disk and introduced the “scent of a time machine”. And incredible as it may sound, none of these projects won – though all three and each Sign Invitational entry, winner or not, finds a spot-lit home in its shop, where it will continue to capture the attention and imagination of walk-in customers for years to come.

Every year brings a new theme to the Sign Invitational, and this year’s “less is more” provides just the right amount of direction to both jumpstart and guide the creative spark the competitors enjoy so much. “My entry … is a whimsical take on a bride-to-be who is losing weight to fit into her dream wedding dress,” said Mo Flint, owner of Atomic Barn Studios (Willow Spring, NC) and the 2019 Invitational winner for smaller projects. “The concept came right after last year’s show on a long drive to California with my wife.” What’s with these people? “We had our design drawn up before we got home from the 2019 ISA show,” added Rusty and Amanda Gibbs, co-owners of Gibbs Graphics (Leavenworth, WA) . “We came up with the ‘Lizard G’ … inspired by our seven-year-old son’s love of lizards.” 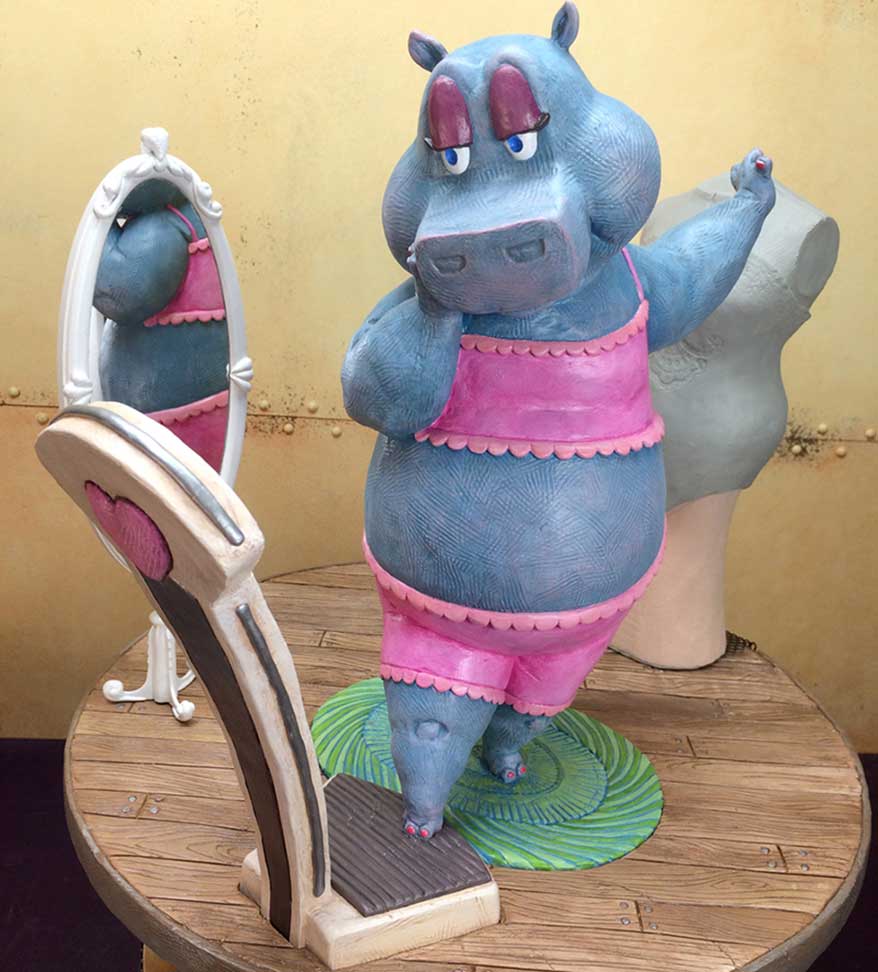 This project by Mo Flint, owner of Atomic Barn Studios (Willow Spring, NC), will require a total 180 hours to complete.

“I have spent roughly 20 hours on the design phase. I estimate I’ll have roughly 100 hours in the finished piece,” said Dawson, one of the few to compete in every invitational, which is even more impressive given the built-in obstacle for everyone: “Finding enough free time to work on it while running a shop.” But that’s not going to keep Dawson from entering his project, “a biomechanical scene that includes a self-replicating robot and his habitat.” This, from less is more? “That habitat consists of a rocky landscape and some bioluminescent trees,” Dawson added. Bioluminescent trees, you say…

Some participants are putting in less time. “So far, I have spent an hour in design time; however, I expect to spend 20 hours,” said Leo Bronstein, owner of Wood Graphics (Santa Paula, CA) , chipping in, “I hope this will be enough.” Compare that to the creators of the ‘Lizard G.’ “We knew we would need to put a lot of time into it, but I think we are over what we expected,” Amanda Gibbs said. “Rusty and I each have at least 60 hours and are still working away.” Not to be outdone, Flint reported, “I’ve probably put about 100 hours into the project and will add another 80 hours by the time it’s complete. There are a whole lot of pastries to sculpt and paint.” Then there’s Sawatzky. “Each week [since last year’s competition] I would put in a few hours as I found time with the goal of finishing the piece by Dec. 31. I almost made it! As in previous years, the hours did add up and I would estimate I have a hundred hours in the piece – considerably less than in previous years because the piece is so much smaller.”

More Is Lesson
One of the most interesting aspects of the Sign Invitational is the competitors’ willingness to try something with their projects that they had never attempted before. The aforementioned floating sign and the project you could smell are good examples from previous competitions. Clayton and Katy Letourneau, co-owners of Custom Sign Lab (Beamsville, ON, Canada) , another married couple entering for the first time, as well as attending their first-ever Sign Expo, experimented with sequencing the lighting of their entry and having it cued by motion sensors. (For more on their project, see page 52.)

“I think I am always learning,” said Steve Davidson, owner of Davidson School of Arts & Crafts (Oceanside, CA) . “I think I know how something will look in my mind’s eye. Then I have to rethink a color or my build. As a sign guy who does custom work, every project has problem-solving issues, but I think that’s what we love about it, too.” Davidson is one of the competitors who keeps the details of his entry close to the vest, in order to preserve the surprise at the show. Dawson concurred that each new build is a learning experience. “Every sample project we do affords us the chance to try new things that we have not done for clients,” he said. “In this instance we are working with concealed wiring and micro-LED modules that allow us to hide electrical elements in our sculpture.”

Lessons are not lost even with the veteran, Sawatzky, whose shop has created more than 100 pieces that could have been entered into a century of Sign Invitationals. “Even though we do exactly [this kind of thing] for a living, we always raise the bar with each project,” he said, which keeps things exciting and fresh. “The little piece I did … is a scale we do not normally work in, which created a whole learning process by itself.”

Rusty and Amanda Gibbs, co-owners of Gibbs Graphics (Leavenworth, WA), have their lizard-enthusiast son to thank for the inspiration behind their first Sign Invitational entry.

Equipment and Supplies
Most of the competitors reported starting their projects by sketching ideas – some on the plane or along the drive home from last year’s Invitational. Adobe Illustrator and Photoshop took it from there for many, with Freeform Plus “for sculpting,” noted by Flint. SA International’s Flexi and EnRoute software were the choice of several to steer their CNC devices, with Vectric Aspire also popular.

Co-organizers Dawson and Sawatsky used MultiCam 3000 routers and plasma cutters, while the Gibbs team did their shaping with an AXYZ router and cutting with a Boss Laser. Flint used a CNC router with X-Edge bits as well as a bandsaw, and Bronstein employed a Dewalt scroll saw for some of his detail work. Of course, various degrees of the carving was done by hand, with Sawatzky citing a sharpened Popsicle stick as the most unusual tool identified.

Coastal Enterprises’ Precision Board HDU of varying weights was the substrate of choice for most of the entrants interviewed, with Magic Sculpt and Abracadabra sculpting epoxies used by a few for fine details. Clayton and Katy Letourneau decided on a different direction, with clear cast and sign white acrylics, as well as kiln-dried ash for the basis of their project. Dawson’s entry also involved use of his shop’s Roland XR 640 printer and Royal Sovereign 61-in. laminator.

Sherwin Williams paint was favored by Flint and Sawatzky, with 1Shot (Bronstein), Modern Masters (Gibbs) and Novacolor Artists acrylics, Createx SSR clear coats and theme paints (Dawson) also called upon. Lighting has become a feature of more projects over the years and this Invitational promises more than ever before. Team Letourneau is trying out Neon Flex and NovaLuxx LED products from GLOBAL LUX. Team Gibbs’ and Sawatzky’s projects will also feature LED lighting. The Gibbs’ “Lizard G” and Flint’s hippo bride-to-be also make use of low-RPM rotators.

Why They Do IT
“This competition is a great excuse to explore and experiment in ways that are not always practical when working for someone else,” Flint said. “Competing with other artists at this level pushes us all to be better, and provides a forum to show our skills to a large audience of professionals.” Davidson agreed. “Another thing that is really good about the competition for me, is that I got to meet the others in the competition from last year, and seeing the extremely talented artisans share their creative ideas was very cool.”

Dawson also enjoys the camaraderie as much as the competition: “My biggest goal is to have fun. I love hanging out with the competitors every year and we learn a lot from each other.” Sawatzky added, “I believe the competition and pieces on display encourage others in the industry to be more creative. Exposure at the show and in Signs of the Times magazine is always a good thing!”

And these entries and others will be on display in our booth (#235) at the ISA Expo in Orlando, where you can vote for your favorite. Don’t miss it!

Mark Kissling is ST’s Editor-in-Chief. Contact him at [email protected]

Should You Offer Free Design Samples to a Potential New Client? 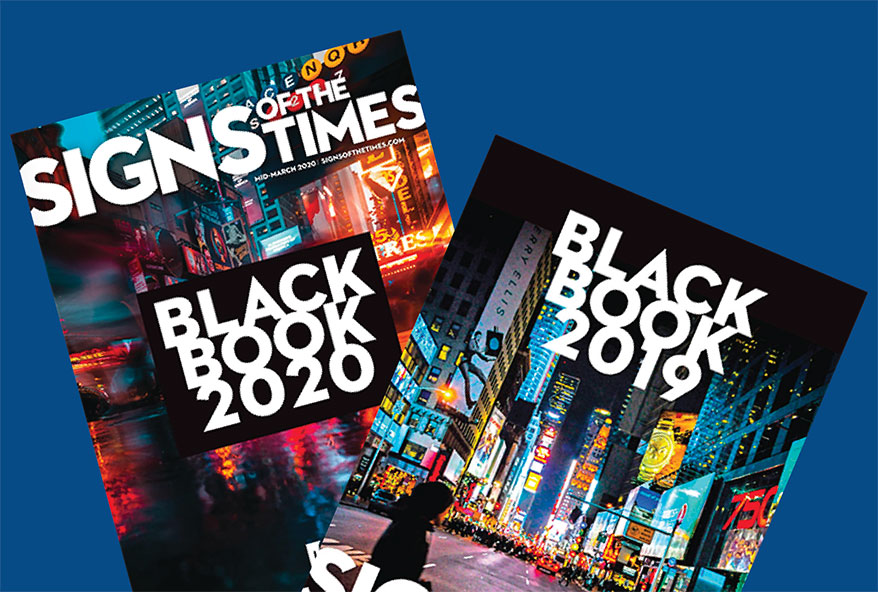