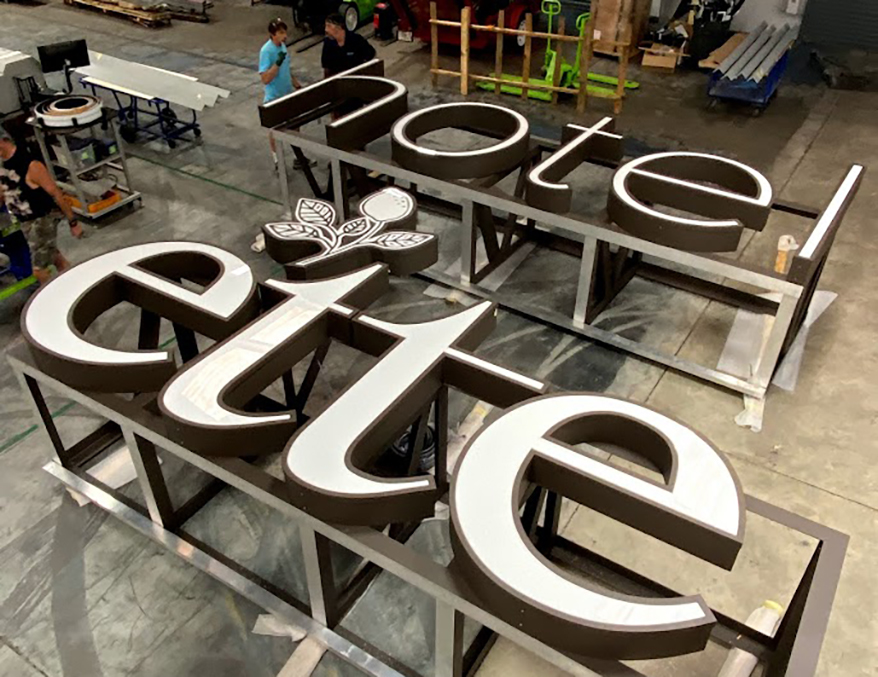 “Ette” may mean “small” but there was nothing small about this job, including these massive channel letters for the side of the building.

YOU EVER HAVE one of those projects that drags on for-ever?
I mean one that spans, not months, but years?

Well, that’s exactly what we’ve had going on. It’s for a “new” client — new ’cause it’s our first project with him, but with “quotes” ’cause it’s been going on for three years!

Ette Hotel is a brand-new, 126-room, luxury, five-star hotel in Kissimmee, FL, right outside of Disney. The property is lavish with first-class finishes, amenities and Michelin-Starred Chef Akira Back. We’re talking one fancy hotel!

Of course, a hotel this special deserves some amazing signs to continue the luxurious feel throughout. The architect already had the signs shown in the plans. Besides a narrow monument road sign and a small entry blade sign, the real treats were the three massive signs on the building itself.

Followed by another stacked version of the same size channels to mount to the porte cochere entry, near eye-level as cars pull in. We’re talking 6-ft.-tall letters, maybe 5 ft. off the ground, right in your face! Oh, and they want these letters in chrome finish. Crazy…

But those aren’t the star-player sign, oh no. That status belongs to the rooftop sign. It features those same-sized channel letters, but in a vertical logo orientation: “ette hotel” (all lower case font) stretching 9 ft., 4 in. tall x 33 ft. long!

However, most Florida jurisdictions don’t allow roof signs to break the plane of the building itself. So, at great expense, the hotelier has a massive four-sided structure built to create a 20-ft.-tall false wall behind the sign, so technically, it is within code. The structure also serves well to hide all the rooftop AC units.

Part of this modification is a 10-ft.-tall x 40-ft.-long steel-beam structure (in front of the false wall) that was built into the roof. Our sign mounts to this, (and a massive aluminum cage framework), in order to clear the front parapet wall of the hotel.

Following me so far? After all this, it’s…

Wanna see us fly the rooftop sign? Scan the QR code to watch this awesome episode of our YouTube series, complete with amazing aerial drone footage!

Now we’re all set. Shop drawings and in-depth engineering are complete so we apply to Osceola County for the permits. They take one look at the drawings and say, “You have like 900 sq. ft. of signage here… You’re only allowed 300.”

What? The overall building plans, showing all signage, were already approved by the County, but now that we are officially applying for sign permits, there’s a different story.

Thus begins our one year variance process. And after what I would guess are hundreds of hours, countless emails, meetings, new drawings and a chunky county fee, Ette Hotel is approved to have nearly triple their “allowed” signage.

The three impressive signs — monument, blade and side-building — are completed and installed. Last week we installed the rooftop sign. Only thing left is the chrome porte cochere sign.

But how in the hell do you chrome-plate a 6-ft. channel letter?

To watch more about this project, check out this episode Dale’s YouTube show! 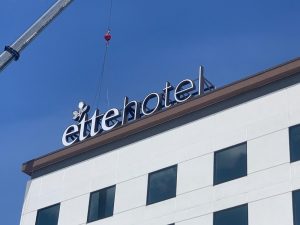 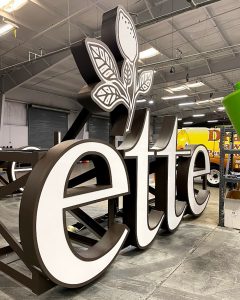 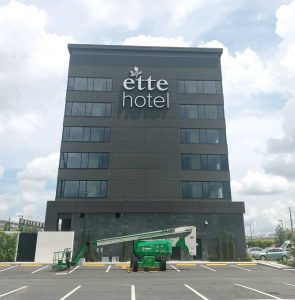 Related Topics:Featuredsignshops in Florida
click to Comment(Comment)
Up Next

The Office, Branded: 3 Spaces Come to Life with Gripping Graphics

Dale Salamacha is the co-owner of Media 1/Wrap This (Sanford, FL). Contact Dale at [email protected].

Can’t Put My Phone Down

Can’t Live Without It, But Probably Should

It Took 250 Hours to Wrap This Lamborghini Huracan