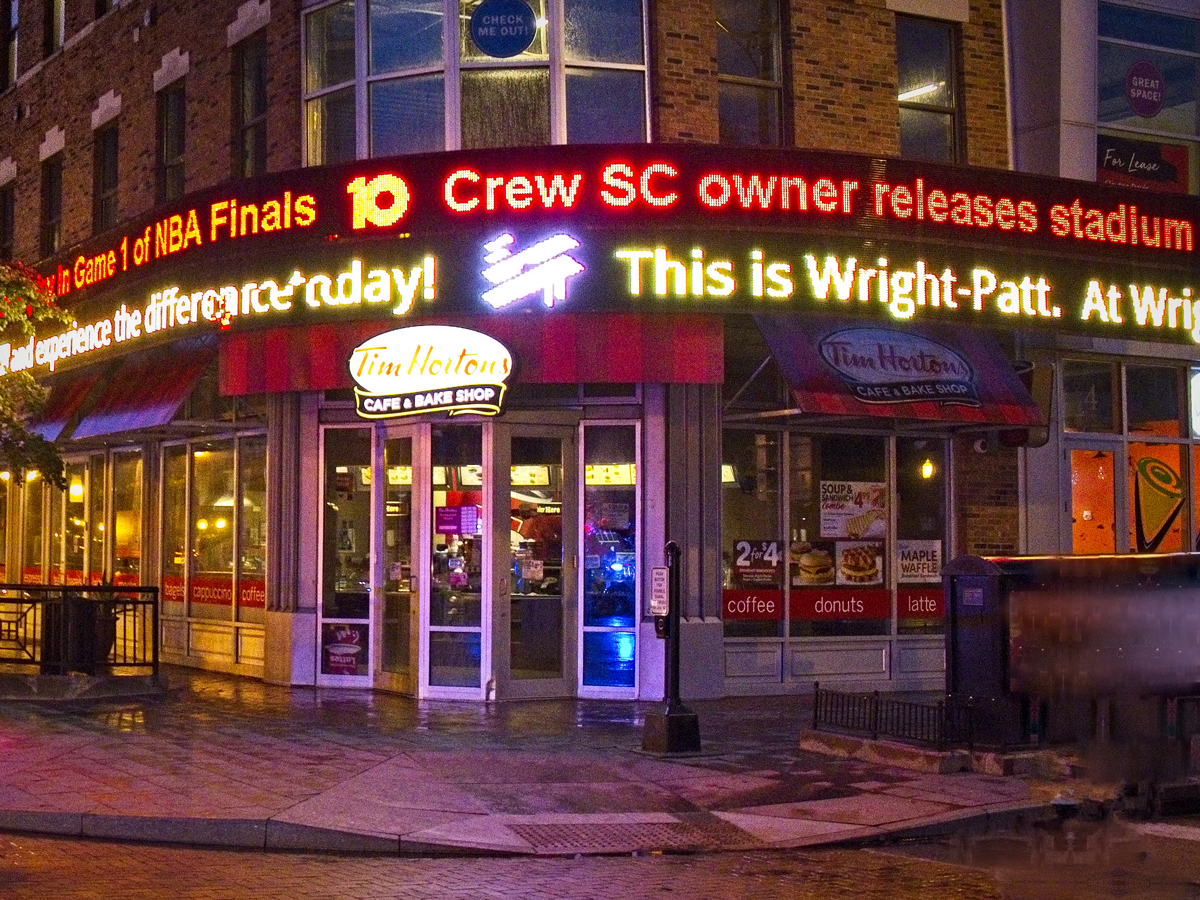 The military taught me to trace rumors backwards, rather than pass them on, so even today, when I hear something others consider as reality, I try to learn where the messenger first gained the information. Add that I enjoy being a skeptic, so, naturally, when I heard someone say signmakers had completely missed the boat on dynamic digital signage (DDS), I asked how this informing person knew this. It was March and we were standing in an aisleway at the Intl. Sign Assn.’s (ISA) tradeshow in Orlando. My informer’s reply was almost believable. “Look around,” he said, “you’re not seeing nearly as much digital signage as was here several years ago.”

Were there more sellers of DDS several years ago? Possibly, but if so, were those earlier exhibitors rock-solid companies or sell-side venture capitalists exploring the field? However, I did look around, but even better I tabbed ISA’s app on my iPhone and, within seconds, learned that 51 companies were listed as exhibitors of dynamic digital signage and 26 offered electronic message centers, i.e., 77 exhibitors total listed in the digital signage categories, including such easily recognized names as Daktronics, Optec Displays, Watchfire and, of course, YESCO. To this, add that the exhibitors list did not include attending sign companies that offer types of digital signage.

Types of digital signage? Sure, television-type screens or large-format digital displays. For example, Times Square spectaculars alone must have 20 acres of digital signage – from 60-ft.-high megasigns 30 stories in the air to varying cheesecake photos in Junior’s restaurant on Broadway. So, before anyone advises signmakers to explore the field, I believe it needs to be narrowed into definable terms. Like, polar opposite of the Times Square spectaculars is the 32-in., entry-level Philips Signage Solutions Commercial Edge-lit LED Display that allows you to create a network, design content, schedule playlists and remote-manage all of that via a cloud-based system. This is a dynamic digital signage system any geek could have displaying commercial content within hours.

See it like a rocket ship commander launching his spacecraft into Carl Sagan’s night of billions and billions of stars, with a fidgeting navigator standing nearby, asking, “Ummm, sir, where would you like to go?” To navigate, you need a compass, but even more important is to know exactly where you are, and equally, exactly where you want to go.

I called Brian Gorg, executive director of the Digital Signage Federation who agreed that the field is large, but added that it is full of opportunities. He said, “Dynamic digital signage includes large-format LED systems, retail and commercial signage, panel displays [LED, LCD, ELD etc.] and the tablet-size units one sees outside of meeting rooms.” There’s more, of course, and during our conversation we discussed the many variants from which sign companies might choose as an additional enterprise.

Most importantly, Brian astutely described the model difference between traditional static (his term) sign companies and the DDS companies. He said, “The traditional sign company invests heavily in infrastructure, followed by offering their ability to produce signage, meaning they capitalize first and then profit off that capital. DDS companies are service oriented, thus the capital is generally provided by others with the revenue gained by providing services.” In the DDS model, the company provides content and management services. “It’s a new way of thinking for most signmakers, because their model is reversed,” he said.

A hidden cost could be content, because some sort of image or graphic needs to appear on the screen, but such images can be created on a small scale by most graphic designers. Large-scale, meaning more expensive and Madison Avenue professional images and videos, are usually provided by your clients. Still, content is a key factor, so be sure it’s in your plan. In addition, small-scale LCD television systems have lifespans similar to home units, although some are built for professional use, requiring little maintenance if operated in proper environments. Add heat, extreme temperature fluctuations and high humidity and you’ve shortened the system lifespan.

Large-format systems are a different ballgame and, as with any technology, one must worry about rocket-science-level installation and maintenance. At ISA, I talked with Lightking’s senior VP of marketing, Javier Oberti, who displayed his company’s new Air Series 12V LED billboard component. Javier said its air flow-through component is half the weight and, once arrayed and installed, lessens the wind load factor by 20% compared to standard box-type LED signs, helps cool the LED lamps and also makes digital retrofits feasible by lessening the structural reinforcement costs.

I also talked with Optec Display’s marketing and creative director Evan Sands and asked him maintenance questions. Evan allowed me to hands-on examine Optec’s Intelligent-M2 outdoor LED display panels, to determine if its minimal connector points (one cable per tile) with 5-pin connectors would withstand weather, especially New York weather (it truly is extreme). These fully sealed units are front- and rear-weather tested and built to withstand salt-mist, vibration, temperature extremes and voltage surges. They also feature a diagnostics utility that automates alerts. I went away impressed.

The Outdoor Advertising Association of America (OAAA) is surely the oldest and most solid organization to study DDS and, expectedly, it has the most impressive data collection on the subject. Like ISA, its website (oaaa.org) provides data, how-to and lobbying information. OAAA’s website lists its count of out-of-home digital displays as 7,800 digital billboards and 1.25 million digital place-based signs, with, of course, zillions of standard billboards, transit, street furniture and place-based signs. In addition, the OAAA site presents a copy of the 2015 Nielsen Digital Billboard Study, created by its senior media research architect Diane Williams. OAAA commissioned the Nielsen On-Location survey to help advertisers and media sellers better understand digital billboards, a mass medium. The data collection method comprised 1,256 online surveys with US residents aged 18 or older who lived in and around five major cities. The respondents were screened for having traveled on specified roads containing digital billboards.

Over a 30-day period, an ad recall was tested for 30 OOH advertising campaigns running on select digital billboards in these markets – six brands per market. The results? Seventy-five percent noticed a digital billboard in the past month; 55% noticed the message on the screen most or all of the time; 71% felt digital billboards stand out more than online ads; 65% considered digital billboards a good way to learn about new businesses in the area; and the best performing product categories were sports, gaming, QSR, recreation, legal services and cable/internet provider campaigns.

Finally, OAAA’s Outdoor Advertising Political Action Committee (OAPAC) is a voluntary, non-partisan political-action committee (PAC), the only one representing the outdoor advertising industry in the nation’s political process. OAAA says it’s the voice of outdoor advertising firms on Capitol Hill and across the country. OAPAC is part of OAAA’s strategy to educate new members of Congress and help re-elect the industry’s allies in the US House of Representatives and Senate. And yes, it accepts contributions.