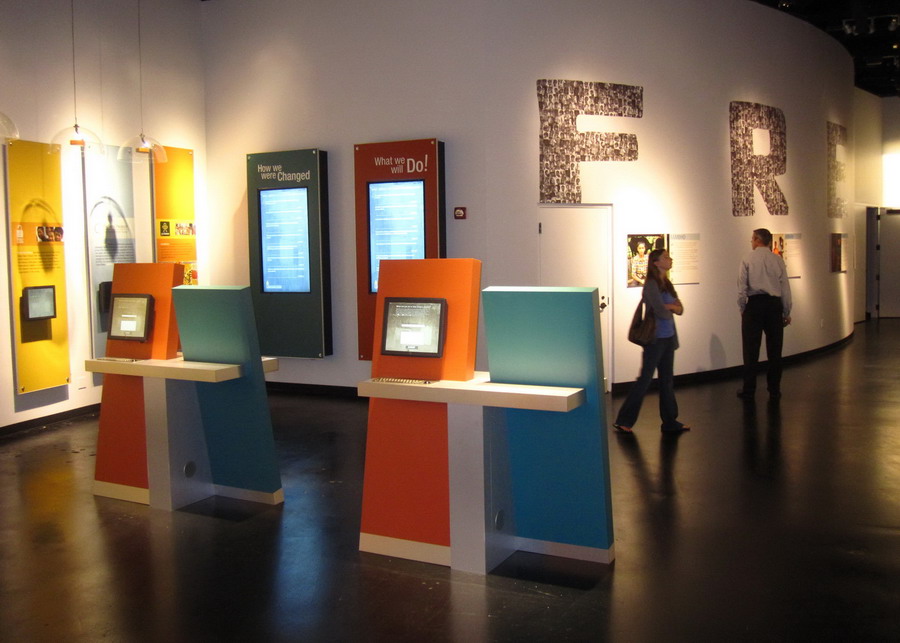 Electronic Art (Cincinnati) created and installed digital, interactive displays and many video components for the Cincinnati-based National Underground Railroad Freedom Center’s Invisible: Slavery Today exhibit. The exhibit includes 17, high-definition, touchscreen displays and several digital kiosks, including a 55-in. touchscreen display that allows visitors to access statistics on modern slavery from the U.S. State Department.
Tim Burke, Electronic Art’s president, said, “Museumgoers have come to expect leading-edge technology as well as some element of interaction to be a part of the overall experience. This exhibit was created in a very short timeframe, yet we were able to deliver quality design and programming for the exhibit opening.”
Paul Bernish, the center’s director of anti-slavery and human-trafficking initiatives, said, “We’ve had a longstanding collaboration with Electronic Art for our website design. Their work on this exhibit is a tribute to their versatility.”
Invisible: Slavery Today is a permanent exhibit on modern-day slavery and human trafficking that occupies some 4,000 sq. ft. in the Freedom Center s east pavilion. Through various techniques and media, including videos, audio and touchscreen presentations, Invisible examines slavery in the modern world through the life experiences of five individuals who were caught up in one of the five most common forms of exploitation.
The concluding section of the exhibition is devoted to anti-slavery activities underway around the world, including efforts from the Freedom Center s partners in the exhibition: Free the Slaves, Goodweave, the International Justice Mission and the Polaris Project. Visitors are also asked to make a personal commitment to be 21st Century Abolitionists in the cause of freedom by adding their commitment to touchscreen kiosks, which are digitally integrated into large-format content.