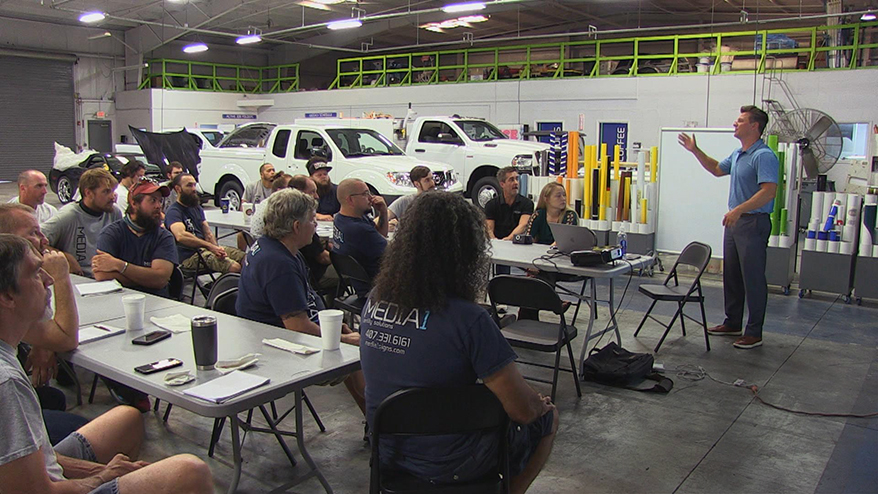 AFTER 37 YEARS in business, you would think that we’d have it all down, right? That’s a lot of successful years, and a business would surely have everything it needed to keep it successful. All nuances of the sign industry and business operations humming along in harmony. There couldn’t possibly be anything that we missed!

The real deal is we have zero tools in place to organize our daily business actions. OK, not zero tools, let’s say primitive. We use Excel to track our sales, cash flow, job charts, etc., but nothing customized to a sign business, and nothing cohesive. The amount of intra-office email strands for one job reaches the hundreds. No joke. Ever try to search through 87 emails to find that raceway color you just know the client sent you a month ago? Brutal.

Here’s a typical scenario: Rick and I head to a site-survey, trusty yellow notepad in tow. We measure, take photos, write stuff down. Then on to the next. Back to the shop, we answer 100 emails, three phone calls, two Post-Its, four employees with random questions, and realize “someone” forgot to order the aluminum for today’s project. And then I ask for Rick’s yellow notepad. He says, “You had the notepad. I was taking pictures.” Oh my gawd. I must’ve left it in the field. Get my point?

We recently asked employees for one best idea from each of our two divisions to make us better/faster/stronger — with 55-in. Samsung TVs going to the two anonymous winners. We also discovered that 10 of the 34 ideas suggested we acquire some type of management software that could organize our shop orders, job tracking, estimating (and surveys!), etc. Everyone was sick of the invariably half-empty “job” folders littered throughout the building.

But what 21st-century sorcery could conjure such a mythical creature? We sat and pondered… None of us thought it existed.

Because it has to be specific to the sign industry! We didn’t want to “adapt” a generic system to work for signs. And no way, as a custom design/build firm, could any software help us price our projects. It’s just too tricky, too many variables. The sq.-ft.-pricing formulas I developed over 30 years were the only quick, easy way to do it. From wraps, to channels, to massive signs, we had sq.-ft.-formulas for all of them. And they work. Kinda. Most of the time. We think. (We really don’t know…)

Fitting Our Round Peg

A Facebook sign group had our answers, and after thorough reviews of several suggested solutions, the one fitting our shop the best was the clear winner: Square Coil. After a Zoom meeting with the company founder, Aaron Clippinger (and Marissa!), we were instructed to watch several demo videos to clinch our decision. Convinced, we signed up and flew Aaron in from San Diego for his signature, three-day Immersion Clinic.

The 8:00-a.m., company-wide intro-class drew waves of excitement, equaled by apprehension. We nervously gazed at the makeshift theater screen — expertly crafted with banner stock thrown over a welding screen. Nobody touched the donuts…. Could this system be the answer? Three days later, we were sure of it. You see, Aaron is a second-generation sign guy, the head of a 45-year-old California sign company, Integrated Signs. We immediately knew he was one of us, and his street cred soared.

But since my editor stifles me to 600 words, I’m outta time, so you’re gonna have to wait until next month for the rest. I’ll finish up our training, as well as give you an update on how the system is actually working! Keep signing, y’all!

Advertisement
Related Topics:Business ManagementFeaturedShop OperationsSoftware
click to Comment(Comment)
Up Next

How a Sign Company Can Renovate Its Own Office

Dale Salamacha is the co-owner of Media 1/Wrap This (Sanford, FL). Contact Dale at [email protected].