Noah of Noah Fine Art painted the "Japanimation-style" airbrush artwork on the screaming-pink Honda S2000 that tears up the streets in the movie 2Fast 2Furious. Although the California-based artist works primarily in fine art and murals, he's occasionally tapped to work on a car — usually a high-end vehicle.

Noah works quickly and produces quality work, something that provides an edge when a project's timeframe requires a fast turnaround — such as the cars (he painted four identical Hondas for various uses in the movie and for promotion) for the film. He won't reveal exactly how long he spent painting the cars, but he confirms it was "quick." 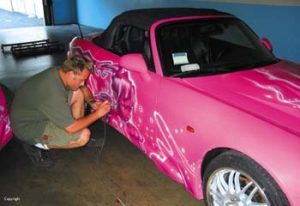 Related Topics:March 2006Vehicles + Vinyl
click to Comment(Comment)
Up Next