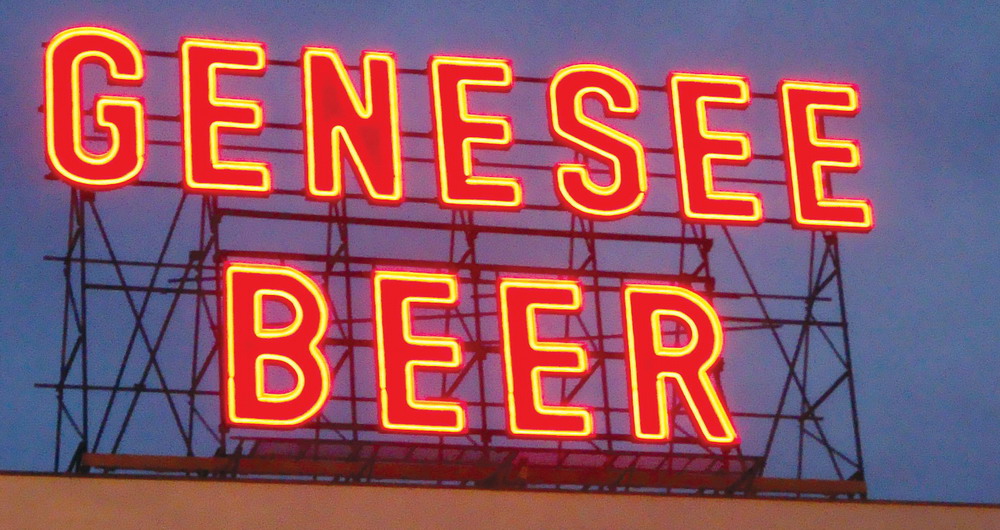 Founded in 1878, Genesee brews beer and cream ales well known through the Northeast and beyond. Since 1952, the Genesee brand (which is now owned by North American Breweries, the largest independent beer company in the U.S.) has been proudly advertised by a rooftop sign in Auburn, NY, where the brewery is located. The sign was installed atop the Auburn Music Center, which later became Speno Music, at 3 E. Genesee St.

However, for more than 30 years, the sign’s neon tubing remained dark. The upkeep for repairs became too expensive, although Genesee continued to pay the sign’s annual rent – $1,500 and a monthly case of Genny Cream Ale to Nicholas Speno Jr., the late former owner of Speno Music. Approximately three years ago, as the economy tumbled and Genesee’s ownership changed hands, the sign’s existence was threatened. Those now in the charge of the legendary brand weren’t initially interested in paying the sign’s rent and didn’t object to the sign’s removal.

However, Speno, who passed away last year, and his son, Mike, didn’t want the sign to disappear into memory. They enlisted the Auburn Business Improvement District to distribute information about the sign, which included old news clippings, videotaped testim-onials from locals about the sign’s importance, and related promotional materials. Overwhelming response compelled North American Breweries’ management to not only retain the sign, but to subsidize a $60,000 renovation to illuminate the sign.

We were honored to participate in preserving a vital part of local history. Here’s how we did it.

A new spin on retro
We sent our bid for the project to Mower and Assoc., a marketing and public-relations firm with four offices in upstate New York that North American Breweries retained to execute the project. I believe we got the job because our solution – 380 linear ft. of LED border tubing – most closely approximated the original sign. Others proposed removing the old letters and installing standard, backlit channel letters. We believed this wouldn’t do justice to the legendary sign. It was, however, a first for us. We’ve completed plenty of LED retrofits, but this was our first execution of a sign illuminated with flexible, LED-lit tubing.

There were discussions of illuminating the sign with new neon tubing, but the cost of operation and maintenance were key factors in persuading the client to use LEDs. Using these modules, the sign requires only 20mA of power; we estimate the original neon sign consumed approximately 50mA. We chose SloanLED’s FlexiBrite border tubing because we’re familiar with their products, and its tubing provided the closest resemblance to neon.

For its age, the sign was in decent shape. However, it was pretty weathered and required two pickup loads full of old neon transformers, electrical wiring and old wood framing, which had long since been replaced by metal, to be removed. To sand the sign’s rusty metal frame bare, we used 80-grit sandpaper and DeWalt orbital sanders. The sanding process required two full days.

After we’d removed the rust and debris from the frames, and primed the bare-metal spots, we coated it with three layers of Benjamin Moore’s Super Sec alkaline enamel coating. New-generation paints adhere to surfaces much more efficiently than their predecessors; thus, we were able to coat the sign with only nine gallons of paint.

Bright ideas
To convince the customer that LEDs were the most energy-efficient, economical choice for the job, we relayed detailed information from Garston Sign Supply, our primary vendor, and Davis Marketing, our liaison to SloanLED, which outlined the long-term advantages of LED illumination.

To secure the tubing to the frame, we installed SloanLED’s mounting-clip system. Powering the luminous, red letters entailed 22 SloanLED modular 60W, 12VDC all-weather power supplies. The power supplies carry an IP68 rating, which deems them sufficient even for such extreme environments as rooftops in upstate New York that will receive heavy snow. A Utilitech swiveling photocell governs the system and triggers the sign to light up at dusk.

We were only allotted three weeks for the entire job, so we had to work efficiently. To get our workers into position (it was 85 ft. from the ground to the sign), we used a Genie S125 125-ft. lift.

The logistics presented the job’s biggest challenge. Set-up and breakdown alone occupied approximately three hours a day. We had to close a lane of traffic every day during construction, as well as block off the sidewalk and set up a scaffold tunnel to prevent construction from interfering with neighboring business’ activities.

In August, the newly lit sign was unveiled before an estimated crowd of 7,000. The community support was completely overwhelming. Many recalled Genesee beers and cream ales being the favorite brand of friends and relatives. We were proud of our part in giving back to the city of Auburn a long-missing icon to its nighttime skyline. And, the exposure certainly helped us gain new business, so it’s a win-win situation.