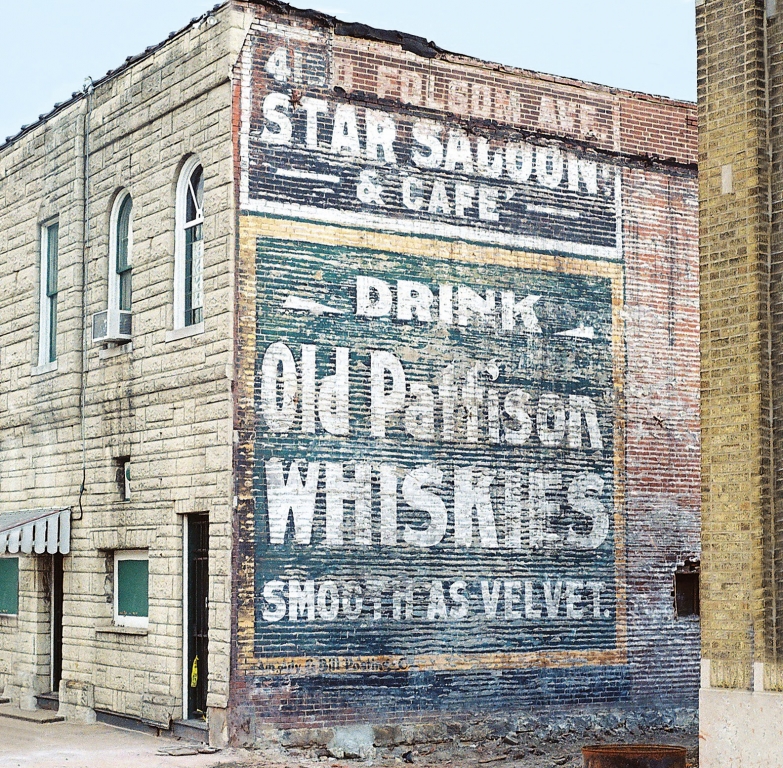 Wm. Stage is a St. Louis-based writer and photographer. He is the author of Ghost Signs: Brick Wall Signs in America; The Painted Ad: A Postcard Book of Vintage Brick Wall Signs; and The Fading Ads Of St. Louis, published by The History Press, which is due for release this year.

Given its enduring beer-brewing and manufacturing legacy, St. Louis, not surprisingly, enjoys an array of ghost signs. I’ve been documenting them since 1978, and I’ve catalogued more than 100. Beer and tobacco advertisements are standard subjects, but I’ve also seen quite a few that hawk flour mixes, clothing stores and soft drinks.

Driving along Folsom Ave. in South St. Louis last September, I discovered another, previously lost ghost sign. Touting a long-defunct brand of distilled spirits, Old Pattison Whiskey, the wall has now seen the light of day after 112 years. This beautiful wall sign became exposed last June when the adjoining building collapsed. It wasn’t caused by weather or environmental factors; a lack of repairs to the building’s tuck points had caused the brick structure to weaken and ultimately implode.

Don Bonnell owns both buildings, plus a third connected structure where he operates a machine shop. The sign must have been painted prior to 1900, he reasons, because the building bearing the sign was built in 1895, while the adjoining, now-crumbled structure dates to 1899. This four-year window coincides with the short-lived history of Pattison’s Limited of Edinburgh, Scotland, a distillery that was incorporated in 1896 and went bankrupt two years later. Despite the company’s brief duration, the company’s history is well-documented on Wikipedia. The author was likely a distillery historian or aficionado.

The company spent a veritable fortune on advertising: £60,000 ($94,110) in 1898, the equivalent of £4.3 million today ($6.75 million), in the U.K. alone. Such largesse was presumably a factor in its demise. Yet, more than a century later, across the Atlantic Ocean and half a continent, Old Pattison’s legacy endures.
For several months after the building’s collapse, the damage was left unattended. The facade continued to fold in upon itself; the roof, succumbing to gravity, jutted earthward, and the once-stalwart storefront now resembled a gaping maw spewing bricks and mortar.

Broad, yellow, crime-scene tape surrounded the condemned building, fastened to anything upright in the vain hope of containing the rubble. The neglect wasn’t Bonnell’s fault; he’d paid a contractor to tear down the derelict structure and haul away the debris. The contractor was busy on another job, and promised he would get to it when he could. He eventually did . . . the following year.

During this interim period between partial exposure and complete unveiling of the old wall, what snippets the sign revealed became quite tantalizing. At the far left, large letters started to spell out “Old Pa-”. The letter “W” was the only visible part of the line of copy below. The white letters stood against a dark-green backdrop. With so little of the sign actually visible, how did we know it read Old Pattison Whisky? The building’s east-facing wall once bore the exact same sign before it had been painted over in the 1960s by the owner of the Kracker Jack Bar, which then resided in that building.

What’s entirely legible at the top of this building, above the currently obscured whiskey sign, is the name of the business that once flourished here: Star Saloon & Café. Painting a whiskey ad on the side of a saloon made sense, especially when, across the street, the old Liggett & Myers Tobacco Co. resided, one of several plants once operated by one of America’s oldest and most successful tobacco companies.

The factory, a sprawling complex that occupied several blocks, was shuttered after a major fire in the late 1970s. But while it operated, the Star Saloon & Cafe undoubtedly stayed busy day and night, likely populated by hungry, thirsty factory workers coming off or going on their shifts. How convenient for having a little snort or a cup of joe before heading off to make tobacco products.

The saloon’s name is a nod to one of Liggett & Myers’ most popular products, Star Chewing Tobacco (not to be confused with Starr Chewing Tobacco, a current, low-cost brand). And, just up the street, one block west from the old Star Saloon, a large, west-facing wall sign exhorts passersby to “Chew Star Tobacco.” The slogan beneath reads “Leading Brand Of The _____ .”

Alas, the missing word at the bottom is covered by sheetmetal and other large objects which have been set against the base of the wall, which adjoins private property.

However, it’s virtually assured the boast states, “Leading Brand Of The World.” Original advertising confirms it. A vintage Star Tobacco pouch featured not only this proud slogan but also the cocksure caption, “Men who chew are men who DO.” The package’s design, which featured a skyscraper poking up through Gotham’s metropolis as a backdrop, referenced the Woolworth Building – the world’s tallest from 1913 to 1930 – and claimed that most of the men who built it chewed Star Tobacco.

These signs and the few scattered buildings that remain on this section of Folsom Ave. are the only noticeable reminders of a once-thriving city neighborhood that’s given way to vacant or condemned buildings and the crime that follows decay.

Finally, this February, Don Bonnell called to say the contractor and his crew were onsite to remove the derelict building. At last, the wall sign would be revealed. The demolition crew stacked the bricks squarely on pallets laid in the street. They were loaded onto heavy-duty, flatbed trucks and transported to Louisiana, where they would soon form a new, 21st-Century structure.

We stood back and gazed at the ad’s full copy. From top to bottom, it reads:
“DRINK
Old Pattison
WHISKIES
SMOOTH AS VELVET”
The sign company allowed itself a modest plug. Along the bottom, there’s a faintly visible attribution: American Advertising & Bill Posting.

Had it not been walled in all those years, it would’ve been a ghost sign by now. Still, paints from that era offered superior durability. Rough, porous brick posed problems for the signpainter. Instead of laying on the surface, the first coat of paint might soak into the brick (and possibly the second as well). A painter used a specialized brush, such as a fitch, cutter or filler, depending on its purpose, and applied coat after coat until the results were evident from blocks away.

To those who paint signs today, it may seem incredible that their counterparts from previous gen-
erations mixed their own paint or had an apprentice do it. In fact, ready-mix paints weren’t marketed until the 1930s. These old-time paints contained a pasty substance, known as white lead, which was mixed with color – either dry pigment or pigment ground in linseed oil.

This lead-based mixture – lead-based paints were outlawed in the 1960s – exhibited properties unknown in today’s paints. First, it produced flatter finishes than today’s high-gloss paints. Second, mixing it could require an hour of constant stirring, but the resulting paint would “breathe” with changing weather conditions.

Today’s paint would be considered brittle by comparison. Lastly, due to its thick nature, the paint needed longer drying time between coats – several days, according to some old-timers. This characteristic was an inconvenience to the signpainter, but afforded greater durability.

In the days before the ban on lead-based paints, signpainters were akin to alchemists. They concocted mixtures whose formulae were known only to them and perhaps a close inner circle of friends. Today’s paint formulations yield bright hues unimaginable during the era of lead-based paint. However, they’re thin, and they simply “cover” the brick. By contrast, the hand-mixed paints developed by walldogs of yore contained lead and oils that preserved the brick. That’s why some signs, although quite faded, are still legible more than a century later. The coatings actually soaked into the brick and became part of the structure.

Now that the wall is exposed, many things will prey upon this classic sign. Graffiti artists – I consider them vandals – will see it as something to be “enhanced” (I’d call it “violated”). Birds will crap on it, and the blaring sun of a St. Louis summer will also take its toll. Despite all this, motorists, pedestrians and neighbors will take notice. They may wonder, “When did that sign show up, and who’s behind it?” The answer would likely surprise them: It’s the fruit of a marketing plan hatched in the mahogany-paneled office of Robert P. Pattison, president of a long-defunct distillery that briefly operated in late-19th-Century Scotland.