David Harding, owner of Carrollton, TX-based A Sign of Excellence, needed some help hammering the &frac12;-in.-thick HDU “copper” ring on the Coal Vines sign, so he assigned his 3&frac12;-year-old grandson, David Peña, the distressing task. “He thought it was great fun. I just had to keep him away from everything else with that hammer.” Harding himself added extra touches with ball-peen hammers, wrenches and claw hammers.

Harding had created the coal-fired-oven pizzeria’s sign in 2006 and created two more, almost twice the size (59 x 102 in.), in 2007. Because he doesn’t own a router, Harding asked neighbor and close friend Parker McWhorter of McWhorter Sign Graphics to use his MultiCam 3000 series router with a vacuum hold-down, automatic tool changer and various Belin bits, to help him with the original sign.

“Parker didn’t have 2.5-D soft¬ware, so we improvised to accomplish the beveled look,” Harding said. “We routed the letters’ perimeters with a 120° Belin conic bit and left approximately a &frac14;-in. step to allow us to shape the rest of the letter.” After the router cut the letters with a 1⁄8-in. Belin bit, the men used rasps, files and sandpaper to finish the bevels.

Last spring, McWhorter upgraded to the 2.5-D software, so the MultiCam cut the bevels with a &frac14;-in. Belin bit. Harding tweaked “where the computer diverged from how I thought the design should look.”

When McWhorter upgrades to 3-D software, Harding plans to build files on the scroll work and hammered copper texture. 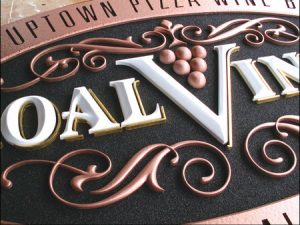