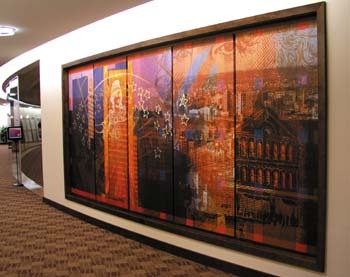 According to muralart.com, a Website that celebrates mural artists and their work, "Murals can awaken our conscience and stir our hearts." Whether they’re painted on a city’s street wall or digitally produced for a prestigious bank’s interior, murals are hip forms of artistic expression.

According to Dorothy, "Unlike billboards, which are designed to make immediate impressions, large-scale artwork is typically displayed in public spaces and intended for longer viewing periods."

For the project, Dorothy carefully considered how the pieces were going to be viewed. Because they were intended for close viewing, she ensured the scenes were detailed and would carry for a distance, and not bore viewers.

She explained, "The goal was for people to move past the artwork, view the scenes sequentially and not soon forget them."

Because the project area was being renovated, the bank’s architect and designer could share their visions with Dorothy. To coincide with the newly remodeled area’s architecture, Dorothy primarily incorporated gold, deep-red and brown color combinations into both the small and large mural sections. In addition, she implemented traces of pink, magenta and turquoise into the large pieces.

"Throughout all the murals," she noted, "gold and brown are pretty prominent — these colors complement the surrounding architecture." 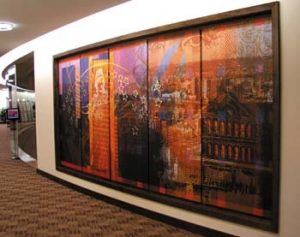 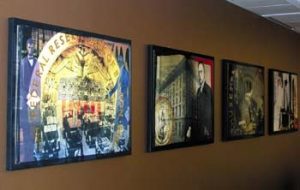 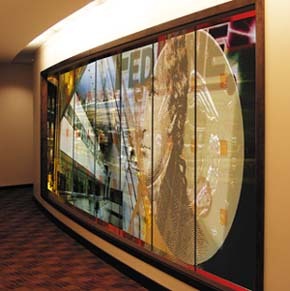