I would have been rather proud of this sign. It wasn’t the biggest sign I ever did, the most expensive, nor was it especially aesthetic, but it was quite functional and strategically placed. Juxtaposing placement most beneficial for the customer, with negotiations with the local municipality, really made it special to me. This great advertising tool would have been perfect, but somehow, it never worked out that way. After all the preliminaries, the customer dropped the ball. What a disappointment.

The customer, two brothers, owned a sporting-goods business. Their advantageous location offered heavy traffic count in a very progressive area of the city. Everything pointed to an already successful business that would flourish even more.

One brother asked me for information about a message-center display. Despite the attractive storefront, they felt it lacked sufficient visual impact.

I knew we’d have issues with the local municipality. It doesn’t allow perpendicular hanging signs, and it’s also stingy on square feet. Minimal downtown space complicated placement of any pole sign, especially because the city didn’t want signs hanging over its sidewalks.

First, of course, I needed to sell the sign. The customers wanted to be sold on an electronic message center. They liked them, but weren’t sure one would work for their business. But they’d seen them and had questions.

I considered this an easy sale, because their type of business required constant marketing to the general public.

These northeastern people are very sports minded. Despite being in a small New York town, our customers’ business is surrounded by sports. St. Bonaventure University (the city is also called St. Bonaventure) is just a few miles down the road. “Bonas,” as the locals call it, is synonymous with college basketball. (Remember Bob Lanier? He led the Bonnies to their only Final Four appearance in 1969-’70.)

Additionally, this small city has two high schools with very popular sport curricula: football in the fall, basketball and wrestling in the winter, and, in spring, track and field. Summer brings softball and baseball tournaments; local businesses sponsor bowling and billiards leagues.

I sat down with my customer and explained the community’s sports interests. I showed him the local newspaper as an example, in which more than 60% of its content was sports! The newspaper used local sports news to help sell its own paper. Who won the basketball game last night? Where did our team place in the semi-finals? Who do we play next week for high school football?

Additionally, I showed how newspaper articles focused on individuals and why this was important. It personalized the article, with names many of the readers knew. This helped make the newspaper part of the community.

I then explained how a message center can function like the newspaper – a sporting-goods store reporting local sports events and people. He didn’t immediately understand.

I asked him to notice the increase in traffic before and after St. Bonaventure basketball games. Why not market to this particular traffic, by referencing the game?

I suggested the importance of using athletes’ names. How many kitchen-table conversations might then mention your business? “I saw Larry’s name on the Sport’s Locker sign today. He scored 22 points last night.”

The message center could bring the company into local homes. People who later were looking for sports paraphernalia would be more apt to shop at a familiar name. They could target-market the traffic for different times during the day.

Any business can offer a 25%-off sale. They’re alarmingly common. When I was young, January white sales were important to my parents because true “sales” weren’t everyday occurrences. To be different, I suggested not mentioning a sale.

The customer and I sat down to devise myriad ways to beneficially use the message center. When we finished, the customer couldn’t sign the contract fast enough! I couldn’t wait to see how the customer used the new medium the next few weeks.

Several weeks passed. Permitting was a real hassle, but we could finally order the message display and started construction. As mentioned earlier, we needed to balance function with local regulations.

We liked the results. The sign communicated with traffic without being overly obnoxious. It seemed to suit its surroundings, and everyone noticed it.

Its first day, the message center advertised store specials, similar to what the store’s sign had done for the past five years. Columbia jackets 25% off, Nike footwear 20% off, Christmas and holiday specials. It read like a Sunday-edition newspaper. Sales are great, but wouldn’t some variety be nice? Had our conversation even occurred?

How’s the saying go? “You can lead a horse to water, but you can’t make them drink”? I guess I shouldn’t be surprised. How many customers have under-utilized readerboard signs we’ve made? One customer put up a message several years ago; it’s still there.

This, however, won’t stop me from using the same selling technique to future customers. It is what it is, and I have other fish to fry. 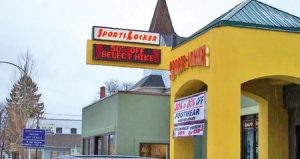 Related Topics:April 2008Business Management
click to Comment(Comment)
Up Next