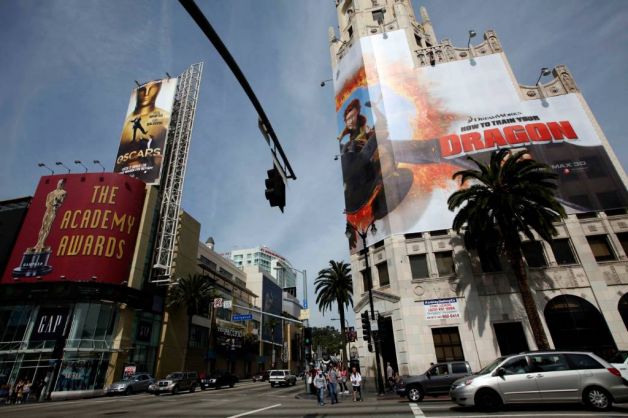 Kayvan Setareh, a Los Angeles businessman, was arrested for draping a building, near the site of the upcoming Oscars, with a supergraphic advertising Dreamwork’s How to Train Your Dragon. Setareh agreed to remove the sign in exchange for reduced bail. Arraignment was postponed until March 30, reported the Los Angeles Times.
Setareh, of Pacific Palisades, was arrested at his home Friday night, February 26, and ordered held on $1 million bail. An arrest warrant obtained by Los Angeles City Attorney Carmen Trutanich accused Setareh of three, misdemeanor, city-code violations, two of them related to the city sign law.
Superior Court Judge Mildred Escobedo accepted the deal between Setareh’s lawyers and the city attorney’s office, which dropped his bail from $1 million to $100,000 after Setareh agreed to have a crew begin removing the eight-story ad by Monday, March 1.
Setareh is the first person to face criminal charges under Los Angeles’ recent, citywide, supergraphics ban. Less than a week earlier, the office filed its first civil complaint under the ban, against a business accused of installing supergraphic signs at 12 Los Angeles locations.
The city attorney’s office said Setareh was warned, via letters and emails, not to hang a supergraphic on the building without a permit. Setareh’s attorney, Andrew Stein, says he has seen no evidence that his client was warned not to post the ad.
City officials say unpermitted supergraphics pose a threat to public safety because, they claim, huge vinyl sheets can fall onto cars and pedestrians if they aren’t attached properly, and they clutter the streetscape.
Details about the story can be found at www.huffingtonpost.com/2010/03/01/kayvan-setareh-pacific-pa_n_480707.html

The Value of Signs