That mostly steel car you drove to work this morning was once a rock. Somewhere in its geological past, a smelting operation changed the rock — iron ore — into the metals used in your car. In fact, iron ore, in forms of magnetite, hematite, limonite, goethite and taconite, is a part of everything metal on your car, including the bauxite-based aluminum, because it contains iron impurities.

Of course, there s iron-free plastic in the car, too, but, because they make plastic from dead lizards, I try not to touch it.

Iron ore contains ferrous oxide, an oxidized iron that generally forms through the accumulation of iron-based minerals that have settled on, get this, bog water. In time, these minerals sink, accrue and form the ore. When smelted, the ore forms iron. Today, it s usually combined with alloys to become one of many types of iron or steel.

In the old days, there was wrought iron, cast iron or steel, each produced by heating ore in clay or brick furnaces, then putting it through a tempering process. These furnaces produced a molten iron glob, called a bloom, from the iron ore rocks. That bloom was hammered — wrought (thus the name) — into flattened iron, making it strong and flexible.

Flexibility is a critical asset in any standing structure. In fact, the discovery of a puddle iron smelting process (where molten cast iron is reverberated with oxides to create a lighter and more flexible iron), in the late 1880s, allowed the building of the Eiffel Tower. Puddle iron allowed engineers to create the wide-span, iron arches we enjoy in early 19th Century architecture and bridge structures.

Consider these three essentials when choosing metal for a sign: correctness, cost and corrosion. Correctness means to choose the right metal for the job, such as annealed, cold-rolled steel when you need extra pliability for bending. Costs clearly affect a sign s price and your profit.

Controlling corrosion is a science. In steel, the choices range from such processes as galvanizing, porcelainizing or vitreous-glass coatings, to blending steel, chromium, nickel and aluminum into corrosion-resistant steel.

On quick jobs, six out of ten shops spray small sections with a Rust-Oleum&$174; coating followed with some quick squirts of Krylon®>paint.

Your steel and iron supplier will advise you on corrosion-resistant metals and alloys. He or she may also advise you on the best metal-related equipment and provide you with resources on new welding procedures, fabrication techniques and corrosion control. Also, use your paint supplier as a consultant for corrosion control. Check with both from time to time for new products and processes.

Peter Horsley, in his book Sign Structures and Foundations (available from ST Books, $24.95), offers formulae for determining sign frames. For larger signs, your local, sign-approving authority may require an engineer s stamp of approval on the plans. Contact the engineer in the sketch phase because he ll look at materials, maintenance personnel weights, snow and wind, and then determine how these loads will pass through the structure s steel skeleton. Next, he ll convert these loads to numbers, plans and materials lists, so they become a part of your final design.

When specifying materials for a sign, look at a metal s mechanical properties, that is, its tensile strength, compressive strength, stiffness, shear strength and fatigue, and evaluate these properties against your sign s needs. Here s a closer look at the most critical of these aspects.

Tensile strength, the metal s resistance to a force or load that pulls it apart, is the metal s ability to stretch and return, like a rubber band, to its original state.

Horsley writes, The greatest strain on a pipe or beam sign support [pylon] occurs at the horizontal plane where the steel support is welded to the base plate. All support calculations, he says, should be derived from the conditions at this plane. He adds that wind on a sign face will twist and vibrate the structure.

This worry is supported by civil engineer Benjamin Jones, who, in his book, Engineering Sign Structures (available from ST Books, $75), says a design engineer must ensure that the steel s maximum actual stress loads are substantially less than the yield stress of the steel. In other words, overbuild a bit.

Shear strength is important when, for example, a vertical and horizontal support are riveted together because the sheer strength of the fastener must be greater than the shear load.

Fatigue strength is the material s ability to resist failure during repeated stresses. It s not uncommon for a material subjected to repeat, applied and withdrawn loads to fail sooner than its ultimate strength rating would indicate. As Jones suggested, overbuild a bit.

Finally, OSHA has a new Web page dedicated to eye protection. If you haven t, view the site at www. osha.gov/SLTC/eyeandface_etool. 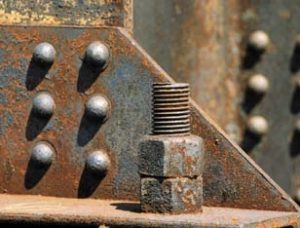