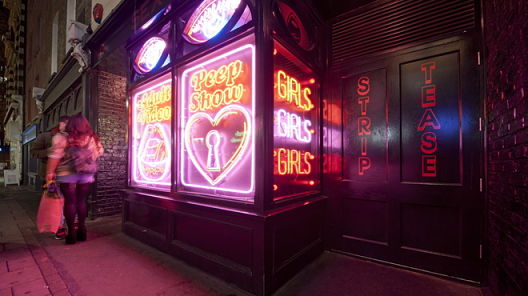 During the 1970s and ‘80s, NYC’s Times Square was awash with sex shops and houses of ill repute. Since, corporate and civic interests have transformed (some would say gentrified) it into a sanitized, family-friendly atmosphere. A similar transition has occurred in London’s SoHo district in the city’s West End. Through the 1990s, the city was notorious for sex shops and nightclubs where London’s organized-crime figures caroused.

Approximately 20 years ago, more respectable types of businesses began replacing many of the shady establishments that once dominated SoHo (however, unlike Times Square, which has become populated by megachains, and accompanying behemoth signage, independent businesses have blossomed in SoHo).
The owners of SoHo’s La Bodega Negra, an upscale Mexican eatery, wished to pay homage to the neighborhood’s “colorful” past with its signage. Serge Becker, a prominent, NYC-based artist, designed the signs, which replicate the type of environmental graphics one would expect outside a striptease establishment: neon-lit window signs that tantalize with “Girls, Girls, Girls”, and “Peep Show”, and window graphics that proclaim “Strip” and “Tease” on the restaurant’s double doors.

However, the neighborhood’s administrative body, the Westminster Council, has objected to the signage and ordered the signs removed. According to a report on the blog Time Out London, the city has already asked SoHo’s remaining sex shops to remove their neon signage. The council cites the abundance of historically classified buildings, and argues that such bright signage detracts from the neighborhood’s historic character.