Recently, in Tokyo, Wade Swormstedt, ST’s publisher/editor; Greg Sharpless, The Big Picture editor, and I took a midnight taxi to the Ginza district, to see its spectacular signs. There, we studied a building-mounted, white-LED-based, steel-clad display. Interestingly, the LED lamps faced inward, which created a softer lighting effect. The grand-scale image was eye-catching, but, from street level, the full effect was lost because the building was boxed in by others. An unfortunate design/visualizing flaw.

In his page 98, May 2006 feature, “Clad with Dreams,” ST Contributing Editor Louis Brill wrote about an innovative, active-matrix, LED display system, in which addressable LEDs are placed within the interlocking links of steel-mesh screens, which are then rigged across a building’s façade, to create a lighted and animated billboard, so to speak. The screens, Louis explained, become a type of cladding — a see-through layer that improves a building exterior’s looks in the day and lights it up at night.

Although you’ll see several versions, including an indoor, plastic-based system, the primary, metal mesh-making — clad-making? — company is 75-year-old Gebr Kufferath Metallweberstraße (GKD), located in Durën, Germany and Cambridge, MD. GKD makes numerous steel-woven clads for architectural use. Its LED-based, Mediamesh cladding has interval-spaced LED strips woven into its Tigris cladding product. Tigris is a stainless-steel mesh that presents 64% open area with cable centers at 31?8 in. The mesh, which is &frac14; in. thick with a 26 ft. maximum width, works like an LED-based, electronic billboard and displays the same types of digital-display information you’ll see on your town’s interstate LED billboard or that of a Las Vegas spectacular: graphics, logos, text, photos and video. A web-based user interface controls the LEDs and programming.

GKD labels its cladding materials as metal fabrics; it manufactures them in various weights, textures and degrees of flexibility and transparency. The company boasts that internationally renowned architects and designers specify its materials — “a blend of beauty and practicality, form and function, technology and craftsmanship” — for interior and exterior applications. Check out its website (www.gkdmetalfabrics.com) because it may generate some novel signmaking ideas.

In September, LED-mesh imagery moved indoors when Saab Automotive used the technology to enhance its display at the Mondial de l’Automobile (World of the Automobile) international auto show. Held at Paris’ Porte de Versailles — the same setting as Viscom’s sign and print show — Mondial de l’Automobile features both new models and concept cars. It’s the most important car show of the year.

The Stealth is a modular, high-resolution, 25mm pixel-pitch display that comprises individual, LED-laden panels that can be assembled to almost any size and shape. Its lightweight structure is near transparent, when the LED lamps are switched off. You can permanently install it, or fold and stack it as a portable system. It’s first-rate for such displays as Saab constructed in Paris, or for general use in tradeshows, stage sets, concerts or as an architectural enhancement.

Simon Property Group, a real-estate investment trust with a total market capitalization of approximately $46 billion, owns, develops and manages retail real estate. Its primary interest is regional malls — premium outlet centers and community lifestyle centers. It owns or has interest in 285 U.S. properties in 38 states that encompass 200 million sq. ft. of lease space. Simon also owns property in Puerto Rico, and has holdings in 53 European shopping centers located in France, Italy and Poland. Further, it has interests in five, Japan-based outlet centers and one in Mexico.

The Chicago-headquartered OnSpot network, a 50/50 venture between the two firms, will be jointly chaired by Publicis’ Simon Badinter, chairman and CEO of that company’s Medias and Regies, Europe and North America; and Stewart Stockdale, chief marketing officer of Simon Property Group and president of Simon Brand Ventures. 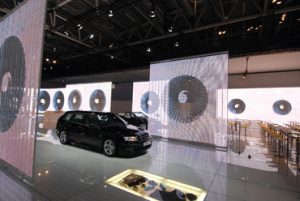