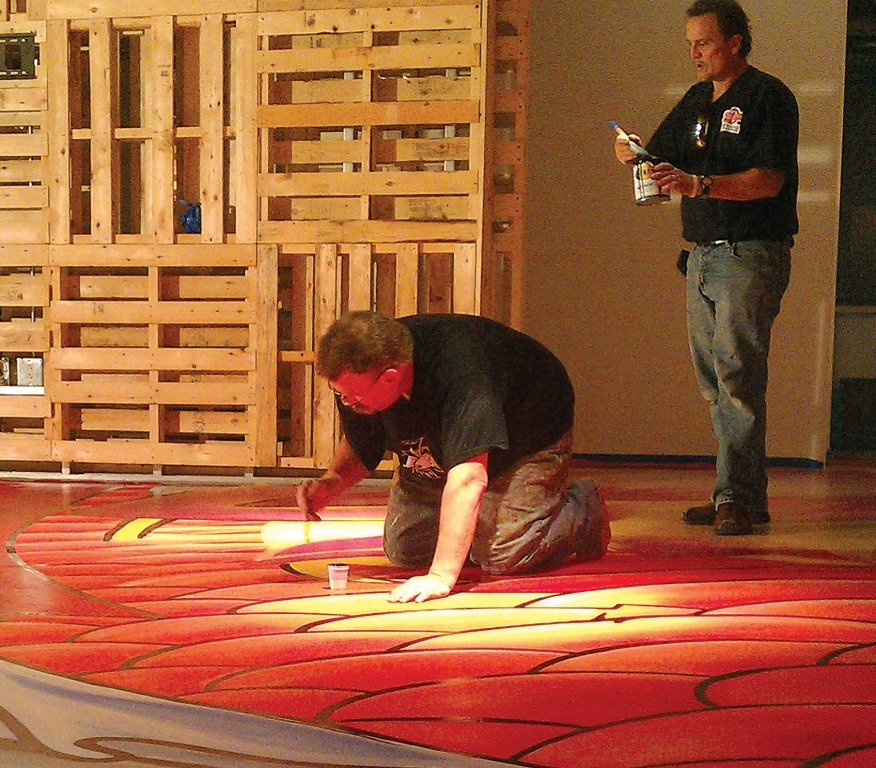 The management of Laughlin Constable’s (a full-service ad agency in business since 1976) Chicago office understands the importance of perception. When a prospect – or, for that matter, an established client – walks into their office, they must believe the firm’s staff will execute a compelling campaign from concept through completion. And, a colorfully designed atmosphere inspires a creatively inclined staff more effectively than gray, bare walls and carpet.

Consequently, Laughlin Constable executives cast a downward glance and chose to develop an approximately 3,000-sq.-ft. floor mural. Chris Metcalf, an illustrator for the firm, crafted a novel design that Mark Drewek, Laughlin’s creative director, refers to as an “exaggerated tattoo” with an emphasis on Asian imagery, such as the koi fish. He digitized his initial hand sketches and refined them with Adobe Photoshop.
A mutual friend referred Laughlin Constable to Mike Meyer, a Mazeppa, MN-based signmaker and mural painter well known within the Letterhead traditional-sign movement. Meyer painted a sample piece on a slab of Durock® cement board, which gained approval.

Laughlin Constable e-mailed vector-art files, and Meyer created clear transparencies. To project them onto the floor, Meyer built a homemade stand that was secured to the ceiling and shot the images downward. He hand sanded the entire floor to ensure proper adhesion. Once the pattern was in place, he outlined the graphics with a Sharpie® permanent marker.

Meyer had seven days to complete the job. After the first night, he realized he couldn’t do it alone. He called in reinforcements; “Cornbread” Scott Lindley, owner of CSL Studios in Mt. Pulaski, IL, and Brad Bandow, co-owner of Brushfire Signs (Williams Bay, WI). They divided and conquered: Bandow outlined the floor with the Sharpie and set up the projector (and assisted with painting); Lindley painted the waves that comprise most of the background; Meyer created most of the foreground details.

The trio used PPG water-based, latex paint; Meyer lauds its fast-drying qualities, which allowed them to quickly walk over the surface and blend colors. Also, the customer wanted a non-toxic coating. They used Mack Brushes (Jonesville, MI) water-based brushes that ranged from ½ to 2 in.

“It was exciting to work during the morning hours in the big city,” Meyer, who lives in a town with approximately 1,000 residents, said. “And, we were across the street from the Chicago Institute of Art, which was also inspiring. This was one of those ideal jobs where the client shares your passion and
your vision.”