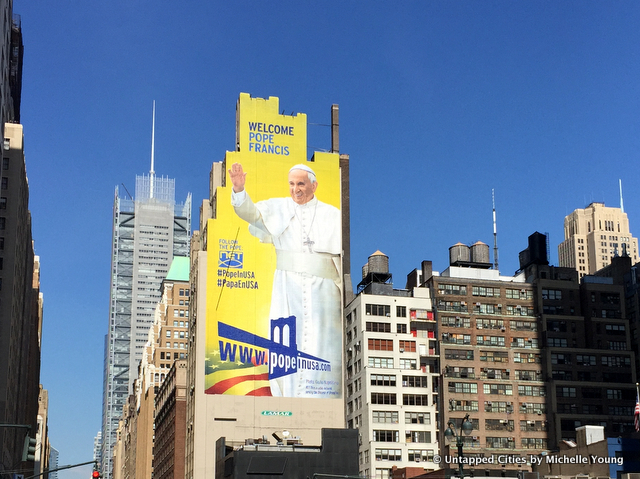 A papal visit to the U.S. represents a momentous occasion for the nation’s Catholics, as well as for political and cultural leaders and even non-Catholics who acknowledge the Pope’s vital role in serving as a moral compass more than one billion believers. Arriving at Joint Base Andrews in Washington, D.C. on Tuesday, Pope Francis, who is making his first U.S. visit since ascending to the papacy in March 2013, will tour Washington D.C., New York and Philadelphia during his five-day visit.
To celebrate his NYC visit, the Diocese of Brooklyn commissioned the painting of 225-ft.-tall, handpainted billboard that depicts Pope Francis on a gargantuan wall at 494 Eighth Ave. in Manhattan. DeSales Media Group, the Diocese’s communication and technology organization, coordinated the project.
A pair of artisans, Van Hecht-Nielsen and David Barnett, painted the mural, which renders Pope Francis 180 ft. tall and in vivid detail, over the course of 10 days. DeSales Media’s Israel Ochoa designed the mural, which features the Pontiff waving in front of a yellow background, and the hashtags, #PopeInUSA and #PapaEnUSA (for Spanish speakers), where followers may track the Pope’s activities and messages.
“This is our way to welcome and evangelize in the heart of this culturally diverse city,” Mons. Kieran Harrington, DeSales Media Group’s chairman, said. “I am convinced that Pope Francis’ apostolic visit will impact everyone, touching hearts across different background and beliefs.”
The mural will remain on display until Oct. 5. Unfortunately for Hecht-Nielsen, a Catholic convert, neither he nor Barnett will be on hand to meet His Holiness when he sees the mural firsthand.
“Maybe one day I’ll get to meet him,” Hecht-Nielsen mused.