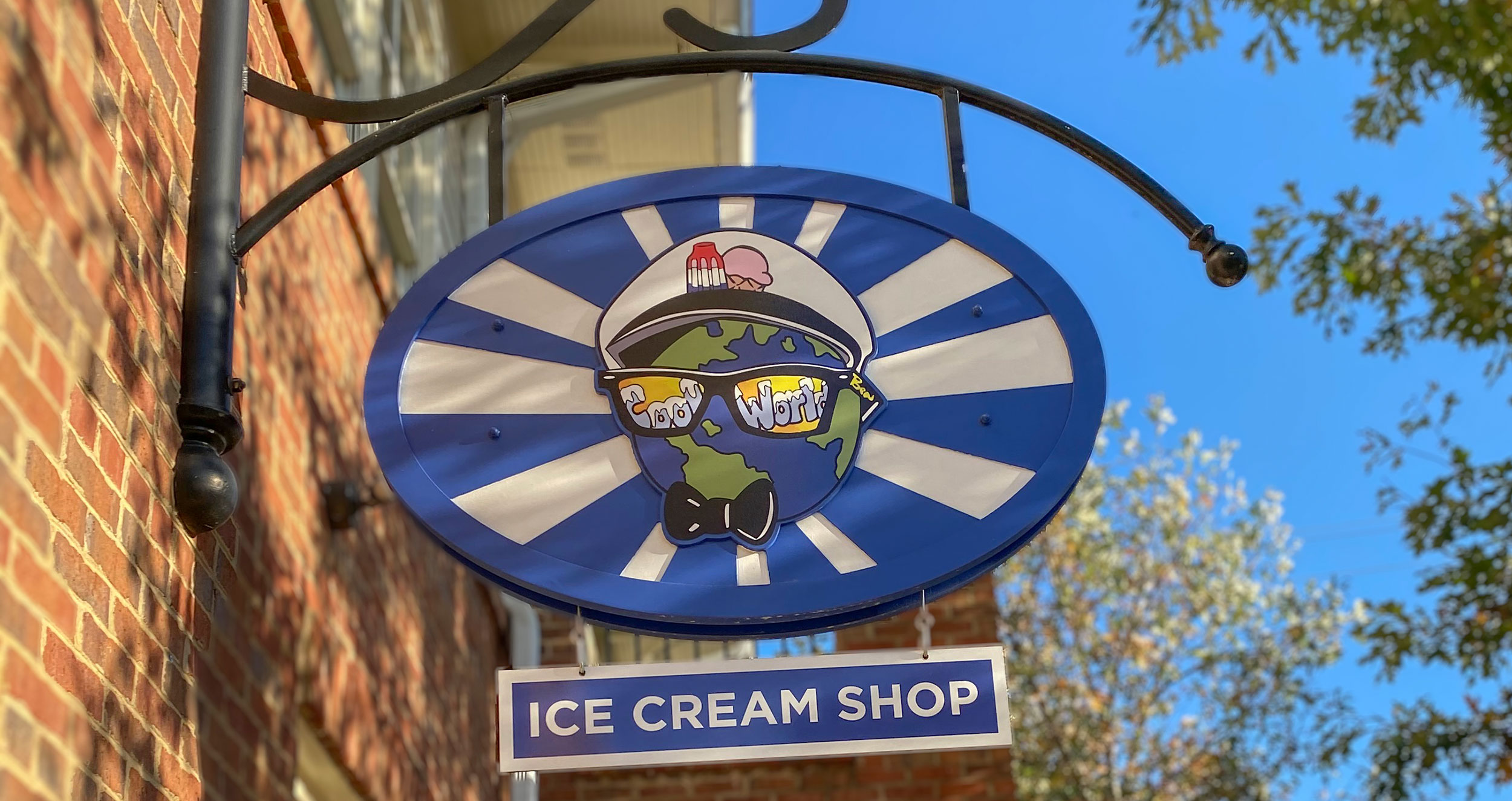 Elizabeth A. Lowry Signs of the Times January 2021 Issue

WHETHER OPENING A first brick-and-mortar store or starting a new life together, customers want to stake their claim, shout their good fortune to the world, make it official. And what better way to signify a new adventure than with a carefully crafted routed sign? That thinking exactly served as the impetus for these two small-but-mighty signs.

Victor “Beau” Tracy Shell is just your typical 16-year-old: Starts a small ice cream business at eight, grows it exponentially by 13, caters hundreds of events, becomes the youngest licensed vendor to work a University of Georgia football home game at Sanford Stadium, opens his own brick-and-mortar location at 15, becomes a public speaker and philanthropist. You know, the usual.

Luckily for The Sign Brothers (Bogart, GA) , they were able to play a small part in this amazing kid’s meteoric rise to local celebrityhood, as they were tasked with wrapping Beau’s first large-scale food trailer with Lil Ice Cream Dude graphics.

“We were thrilled when he came to us with this project. Though we were working on a ‘small business budget,’ we knew a boring flat sign simply wouldn’t live up to his expectations (or reputation),” Lead Designer Griffin DeJoy said. “This is where the Sign Brothers’ method of value engineering really works: [We propose] compelling signage that aligns with our client’s vision, then find the best methods to achieve the vision without breaking the budget.”

To meet these requirements, the team explored all options and engineered best strategies before sending Beau a proof. This meant only routing the outline of the Cool World logo and applying a digitally printed vinyl decal, which “Allowed us to preserve all of the details within the logo while maintaining the desired dimensional appearance,” DeJoy said.

The Sign Brothers shop was given a vector file of the logo, which they rendered in SAi Flexi, plus Adobe Illustrator and Photoshop. After receiving quick approval on the design, they got to work, employing DUNA-USA CORAFOAM HDU for the main part of the suspended blade sign and carving it using SAi’s EnRoute 5 software to drive the shop’s AXYZ Z7 CNC router. The hanging “Ice Cream Shop” panel off the main sign was created out of beBond 6 mm aluminum composite panel (ACP).

With a crafted sign to match the craft ice cream, expect big things from the Lil Ice Cream Dude.

When you think of signs, you probably don’t think of a wedding present, and vice-versa. Yet, that’s just what a long-time client of Royal Signs (Englewood, CO) did when he asked them to design, fabricate and ship a sign for the soon-to-be-wed couple’s home.

President Brad Camp said the client didn’t provide any kind of sign guidelines, except for the wording and its purpose. That meant Royal Signs had free rein on the design. So, after asking the client some questions about the couple in order to personalize it, they settled on a small routed sign with the couple’s last name, their different states’ images, palm trees and subtle footprints in the sand, which were evocative of the beach in Key West, FL, where their wedding took place.

Royal Signs (Englewood, CO) gave a couple of newlyweds the royal treatment by producing a one-of-a-kind routed house sign that cleverly combined their separate hometowns and the place they wed with their surname.

Camp detailed the process of putting together this small, but not insignificant, marriage marker. After using EnRoute to program the file (designed in Illustrator), the 20-lb. Duna Corafoam HDU substrate was carved with a MultiCam 3000 CNC router. The sign was both spray-painted and hand-brushed using Matthews Paint epoxy primer and acrylic polyurethane.

To get the details correct in the state images, Camp said Royal first painted the whole sign and then printed the states’ design using their Direct Color Systems Braille/Tactile UV printer. After routing and finishing, they then shipped the sign off to the happy couple with an install pattern, drill bit, and appropriate blind fasteners so they could install it.

Royal Signs (Englewood, CO) gave a couple of newlyweds the royal treatment by producing a one-of-a-kind routed house sign that cleverly combined their separate hometowns and the place they wed with their surname.