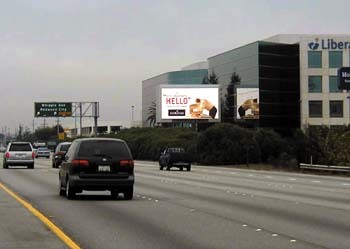 You can’t miss them.

Currently, roadside EDS signs prove the exception, rather than the rule, but they foretell outdoor billboards’ future. In the next few years, electronic billboards will proliferate and integrate with conventional billboards to create highly charged advertising "spaces" along roadways. To show how EDS billboards operate, two regional EDS billboard operators discussed their sign programs and how they manage them as advertisement opportunities for various businesses.

A sight to see

In the San Francisco Bay area, traveling north or south on Highway 101 (a major roadway midway between the San Francisco and San Jose airports), SiliconView’s (Palo Alto, CA) two-sided LED billboard can be seen from at least a quarter mile, in either direction. The board certainly impacts drivers, who have described it as a gigantic, brilliant laptop display the size of a small, semi-truck trailer.

Not something you easily forget, the videoscreen rises 40 ft. above ground, with a 34 x 19-ft. billboard space. The high-definition screen outputs more than 36,600 different colors in a single image. SiliconView’s electronic billboard, along 101 on its northbound side, is easily visible from 2,900 ft. and, from its south side, passing vehicles can see it from at least 3,500 ft. On an average traffic day, at least 235,000 vehicles will pass on each side of the sign.

The board has been a tremendous success, according to SiliconView Senior VP of Sales and Marketing Christine Ackermann. She said that drive-by viewers tend to retain what they see on electronic billboards, more than their contact with static boards, for several reasons.

"First," Ackermann said, "these boards are still a novelty, because most people haven’t seen this kind of outdoor electronic advertising before. The images are very large, bright, colorful and in a high-definition format that makes them easy to see from the road."

They also provide a kinetic display — the sign image keeps changing — allowing drivers the opportunity to view several advertisements in a single space as they pass the board.

Finally, electronic displays like this are more effective because they eliminate the problem of "billboard burnout," which happens when you pass a billboard displaying the same image day after day.

In 2000, SiliconView began its Bay Area EDS billboard operation and established that presence by owning the property and its previous roadside billboard. San Carlos (where the board is located) allowed SiliconView to replace the older billboard with its modern counterpart. The California Department of Transportation’s (CALTRANS) only restriction was that the EDS billboard could not feature animations (which it could easily do). Instead, the board acts as a giant slide projector, displaying only still images (each an advertising spot), one after the other, every 30 seconds.

SiliconView’s advertisers can book both sign faces or one side, depending on their demographic preference — whom they want to reach and when. For example, northbound traffic moving towards San Francisco is the morning commute, and southbound is the evening commute away from the city.

Billboard scheduling is based on a "repeating loop" of advertising messages. The SiliconView loop contains six different messages, each displayed for five seconds with a one-second pause between each message. Thus, one message loop lasts approximately 36 seconds. The loop continuously repeats on a 24-hour basis, which gives each advertiser at least 2,880 viewing exposures per day.

A factor that determines dwell time, or the amount of time a commuter sees a billboard, is the vehicle’s speed approaching the board. At 65 mph, a Highway 101 driver sees at least one full rotation of the SiliconView billboard. During peak hours, when traffic slows, a driver could see three to five loops.

The board is monitored around the clock by television cameras facing the boards’ sides. If an image suffers a disruption or an outage, SiliconView knows about it immediately.

EDS billboards provide a critical benefit: Images always change — displays typically switch every five seconds. Also, clients can change their ads periodically. Contrast this with a static billboard, which entails printing a vinyl banner and installing it on the billboard face.

"Creative," or content, is entirely a digital process at SiliconView. Ackermann capsulized the process: "Once we receive a client’s newly submitted art work and review it, we forward it to production for uploading to the message loop." 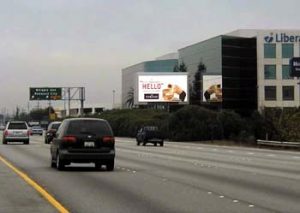 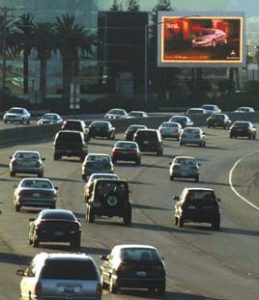 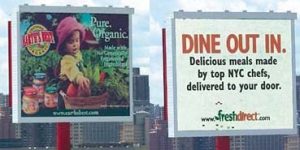