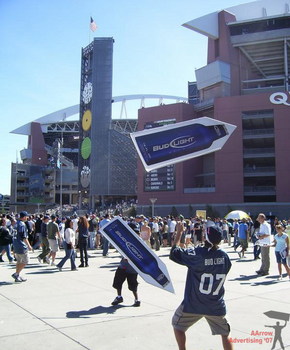 The 21st Century’s glut of advertising options can render would-be customers overwhelmed, if not overtly hostile, towards the oft-resulting state of information overload. To stave off consumer ennui, advertisers must use unique, spontaneous, somewhat edgy campaigns to connect with their desired demographics.

In lieu of Web-based campaigns, narrowcasting or another new-media format, Aarrow Ads, a San Diego-based company that’s expanded nationwide, fills its clients’ need for more direct contact advertising by taking it to the streets. They employ hundreds of “sign spinners,” who toss and twirl hard-backed, digital graphics through a series of choreographed moves to the amazement of gawking crowds.

Co-founders Max Durovic and Mike Kenny, 24 and 23 respectively, first got the idea while working a high-school job where they were paid to stand on a streetcorner or sidewalk and hold the advertiser’s sign. Kenny said, “When you pass by people doing that, they look bored and like they hate themselves. That’s how we felt, so we began twirling and spinning the boards and doing tricks like skateboarders or surfers would. We quickly attracted a lot of attention.”

After another company hired them on weekends to perform their sign-spinning routines to promote a Southern California homebuilder, they considered hiring and training spinners and opening a full-time spinning business. Durovic left Georgetown University for his summer break and, buoyed by an endorsement from a business-school professor, the duo founded Aarrow Ads.

In 2005, they set up shop and began building their business. For spinners to qualify for their job, they must endure a rigorous, boot-camp-style training that tests the physical and mental mettle of Aarrow’s would-be staffers. After passing this first phase, trainees perfect a number of the company’s 250 trademarked moves (some of which are known only by the Aarrow’s master spinners, Kenny said).

To print the graphics, Aarrow typically contracts with a nearby FastSigns® or Sign*A*Rama® franchise. The graphics comprise a 6 x 6-ft., double-sided, corrugated-plastic inkjet print adhered to a rubberized base. The company receives the client’s graphics and formats them to fit the media using Adobe’s Illustrator® or Photoshop®.

Initially, the crux of their business comprised homebuilding companies that hired them to promote open houses at new properties. Gradually, their clientele grew to include such giants as Anheuser-Busch, Glaceau’s VitaminWater, Toys R Us, Cricket Wireless and many others. The spinners’ standard gig lasts five hours. Ever job employs a minimum of two spinners; big projects, such as Anheuser-Busch promotions at NFL football games, attract up to 15 spinners.

“For those jobs, even our accountants get involved,” Kenny said. “Everyone in every office knows how to spin.”

Kenny and Durovic’s formula has proven successful. The company now operates several offices throughout Southern California and has extended operations into New York City (where Durovic now serves as the general manager), Miami, Las Vegas, Phoenix and Raleigh. Kenny has received inquiries from would-be franchisees in Spain, Australia and Brazil.

“This is a very cost-effective way to advertise, and taking the branding message to the audience in such a direct way builds recognition very well,” he said.

For a video demonstration of Aarrow's spinning techniques, visit www.aarrowads.com. 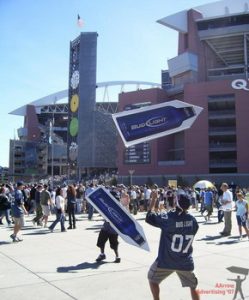