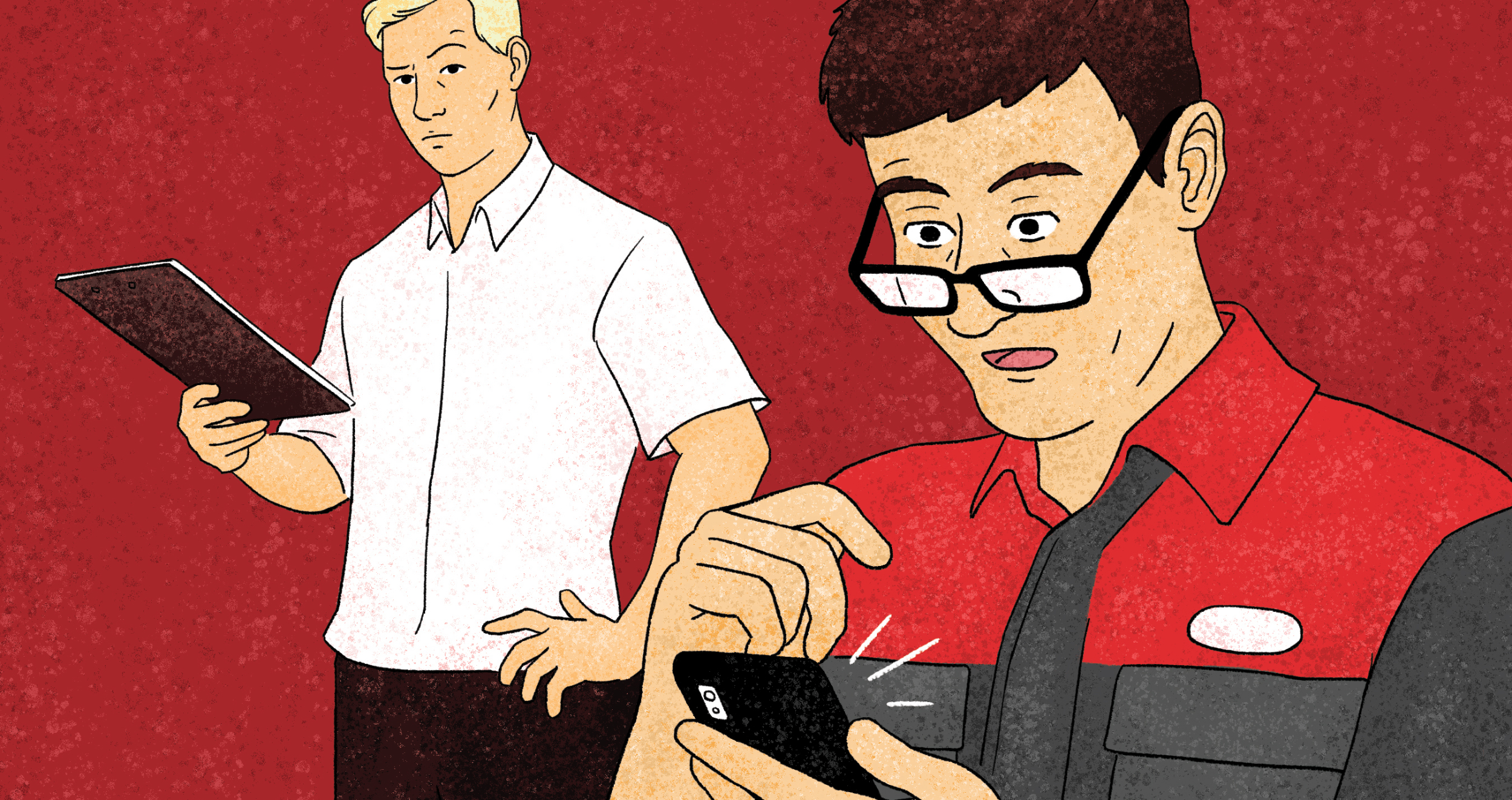 The Case of the Poached Egg

A shop owner gets wrapped up in an attempt to pluck a key employee.

Rolf L'mao Signs of the Times May 2022 Issue Online Extra

TOMMY FARMER WAS proud of the installers who worked for him at Pleasant Ridge Wraps. The three-person team of Jim “Ham” Hampton, Edgar “Egg” Garcia and young Casey Williams were quick, could handle any vehicle, and most importantly, they were reliable. As a duo, Ham and Egg could lay the vinyl down with the best of ’em, with “apprentice” and high school senior Casey showing great promise.

A month ago, attracted by the shop’s Instagram page, new customer Pat Coyote brought his Lamborghini Aventador into Ridge Wraps for a simple color change, though the car’s dramatic intakes and complex design would get the attention of any installer, no matter how adept. Tommy was surprised when his estimate was accepted within five minutes of being emailed. Days later, Coyote and his son arrived with the Lambo’ and another sportscar to leave in, but after Tommy had thanked them and said, “See you in a couple of days,” Coyote asked if his son could see the installers “in action.”

Real Deal scenarios are inspired by true stories, but are changed to sharpen the dilemmas involved and should not be confused with real people or places. Responses are peer-sourced opinions and are NOT a substitute for professional legal advice. Please contact your attorney if you any questions about an employee or customer situation in your own business.

Created by ROLF L’MAO, Signs of the Times’ mascot. Email him at [email protected].

Having satisfied the occasional customer’s curiosity in the past — and never wanting to disappoint a kid Casey’s age — Tommy allowed his new client and son into the shop, though not too close, for a quick look. “I’m afraid the exciting part of the wrap that Ham ’n’ Egg are finishing now is over,” Tommy said. “They’re just trimming and tucking up the rocker panels.” Coyote and son looked around, watched intently for a few minutes, exchanged a few words, then thanked Tommy and left.

They returned two days later and gushed over the “really great job,” asking to personally thank the installers for their careful work. Though they were in the middle of an install, Tommy saw no harm in allowing his crew to receive some direct and much-deserved plaudits, so at a point they could break, he brought them out. “Your boss told me you two are called Ham and Egg,” Coyote said. “Which one is which and why those nicknames?” After exchanging a practiced glance with Jim, Edgar introduced himself and explained he had been known as Egg since his then-toddler little brother couldn’t pronounce “Edgar,” and when he joined the shop years ago, combining so well with his install partner, Jim became Ham and the names stuck. “That’s so fun!” Coyote’s son said. Then the clients departed.

Three weeks later, first thing one morning, Edgar asked to see Tommy privately. He’d been approached, first on Instagram, by Pat Coyote, who was a week away from opening a wrap shop in nearby Hyde Park, though you wouldn’t have known it from their company name or sign. “I owe a lot to you and I really like working here,” Egg said, “But, dude, this guy is offering me almost twice the money.” Tommy was furious but hid it fairly well. “Please don’t answer him today,” Tommy asked Egg. “We both should really think about this for at least 24 hours.” Egg agreed.

Though relieved that Egg wasn’t accepting right away, Tommy was still boiling when he sat down at his desk to consider what to do. Were he to match Coyote’s offer, Tommy would obviously have to do the same for Ham and that would mean raising prices again. He had just done so two months before due to the rising costs of materials. Would his sales volume hold, his regular customers stick with him, and what about new customers? And how — or if — to confront Coyote for trying to poach his installer …

This is a tough one. It is so hard to find talented people in this industry. When you do find them, they are almost impossible to replace. You have to consider what options you really have.

So here are two employees that you have provided an opportunity to learn a valuable trade. They have also done their part in being good employees by being dependable and making you money. Now for more money [one is] ready to abandon you, to go somewhere else. First reaction is bitter disappointment that they would do this to you. But in today’s world, can you blame them? I would probably begrudgingly meet the new pay scale. The business still has to have these two employees to make money. There would be some hard agreements between both parties that this can’t happen again in the near future. As far as the other company that tried to steal them, I would nicely decline to ever help them in any way and have very limited contact.

As in the prodigal son parable … Let them go, yet accept them back with open arms. If the attitude and environment of the workplace are the best you can make it, no amount of money will ever stop someone from leaving and better yet, returning after a horrible experience. But leave again a second time … Never show your face again.

Let him go on good terms; it may not work out well at a brand new shop and maybe he’ll come crawling back. It’s hard to find people, especially if they are good.

Unfortunately, nothing to do. I don’t see how to approach the “competition” and there will always be better offers for your team. We have to be able to offer our members some other value of being on the team rather than just the money portion of it.

The owner should explain how much he appreciates and values Egg and that he agrees with Coyote about his value, but their current business cannot support the wage as he believes Ham would deserve the raise as well. Offer half the wage to him and that Ham would get the same raise if they will stay in the family.

You must be sure the employee is considering everything involved.

If someone is willing to leave, for any reason, you can’t and shouldn’t try to change their mind. If you talk them into staying, they will always hold it against you. “What if…” Give them the facts. Is the new company paying their insurance? How many sick/vacation days do you get? Paid time off? And how long are they going to be in business? Or maybe you teach them the skills they are paying you for and then they fire you…

Don’t lose your diamond, but get insurance. I would give the raise, contingent on their agreeing to signing a non-compete clause.

Not much you can do, other than congratulate Egg and let him go. Often, they will call you in a few months to see if they can come back. Not everything is about the $. The hard part is finding any qualified replacements.

Don’t Be Afraid to Raise Prices to Survive Inflation

Thinking of Quitting a Project? Consider This Before You Make the Decision

How to Prevent Customers from Price-Shopping Your Designs