The mark of the present seems to be a return to the past. This notion of nostalgia can sometimes meet with frightening results, as with fashion’s revival of bell-bottomed pants. However, when adding a nostalgic twist to signage, the results are often a perfect fusion of the classical with the modern.

When development of Denver, CO’s, $99 million Denver Pavilions began in 1993, the architects at ELS/Elbasani & Logan Architects, Berkeley, CA, under the guidance of Partner-in-Charge Barry Elbasani, FAIA, were charged with blending the old with the new. Specifically, the firm had to design a modern retail/entertainment complex on a two-block stretch of downtown Denver’s historic district. As such, the new venue had to complement the surrounding architecture without imitating it.

With more than 400,000 square feet of retail space, an 800-space parking lot underground, a 13-screen United Artists cinema, and big-time stores and restaurants such as Niketown, Virgin Records and the Hard Rock Cafe, this retail/entertainment conglomeration provides many modern amenities for Denver citizens’ eating, shopping and entertainment pleasure. But like many newly built structures, the facade — white stucco — is physically quite plain and has minimal architectural elements to bring it to life. Plus, with the structures separated by a street, the architects needed a strong, central element to bring the structure together.

Therefore, one key element of the Pavilions’ design was the creation of "The Great Wall," a large, curved structure rising 100 feet from the ground, and designed to unify the complex’s two disparate blocks.

Another major design emphasis was the signage. ELS researched the area’s history and, with some early conceptual help from Reginald Wade Richey, an architectural firm in Denver, designed the Denver Pavilions’ striking sign system. The first phase of installation includes the main-identification sign, which reads "Denver Pavilions" and is installed on The Great Wall.

According to D. Jamie Rusin, associate principal at ELS and the Denver Pavilions’ project manager, "The type face chosen for the ‘Denver’ letters is derived from branding irons, which relates symbolically to the region. Typically, branding irons feature minimal intersections and thin strokes. The type face for the Pavilions letters was chosen because it was simple with some distinctive characteristics. And the font is based on Bremen Black BT."

Although the letters are simple in appearance, the structural logistics of creating the letters in "Denver" was somewhat complex, largely because of the letters’ sheer size. Measuring 27 to 36 feet tall and fabricated from structural steel I-beams, the letters’ structure is unusual because steel this strong is typically only used as part of a building’s structural fabric — not for signage. Rusin says, "The use of steel I-beams makes the letters more timeless in appearance and helps to integrate them with the architectural design of the project."

And, with the addition of a laser-cut, hexagonal-patterned, steel-plate edge return, these giant letters evoke a classical look with a high-tech twist. Another innovative aspect to highlight the wall is a nightly light show that floods the wall with moving lights. Besides this show, the letters themselves are illuminated from below, from the building across the street, and from behind the wall to bring attention to the structure and create a lively, visual element to the complex itself. In explaining the light elements, Rusin says, "The source of the lighting is invisible. The design team wanted to avoid internally illuminated sign construction and surface-mounted lighting."

Salt Lake City-based Young Electric Sign Co. (YESCO) has been fabricating and installing large signs for 76 years. So when ELS was developing the sign concept, YESCO’s Denver division worked closely with the architectural firm to come up with a feasible design. In fact, according to Benjamin Jones, YESCO’s civil engineer, "The signage forms most of the visual interest of the project. ELS put a lot of emphasis on the signage, so the designs were well thought-out, and the [signs] are of the highest quality material."

One consideration was Denver’s high winds; the signage would need to withstand vibrations and resonance from winds in excess of 80 miles an hour. Therefore, designers paid much attention to the construction of the letters and the method of attachment.

Because the building is designed to become a city landmark, strength and durability were also key design points. The letters are constructed from high-strength steel I-beams (A572 grade 50). The curved portions of the letters (in the "D" and "R") were rolled at a steel fabrication plant in Chicago, and the rest of the letter strokes were cut, welded and pieced together in YESCO’s Denver plant. Perforated metal returns were fabricated at YESCO’s Las Vegas plant using a computer-guided laser cutter and then attached to each wide flange beam with steel channel supports. The pieces of the wide flange beams were then welded together with complete-joint-penetration welds, which means that the steel is welded all the way through.

Once the letters were entirely fabricated, YESCO sandblasted, primed and painted them with multiple coats of high-grade paint to help "steel" the letters against rust and corrosion. Then, to ensure structural integrity, YESCO’s Jim Kohler, an AWS-certified welder, tested each beam using ultrasonic sounding. Ultrasonic testing involves shooting a sound pulse into the steel and waiting for the pulse’s echo. Depending on how quickly the echo returns, and in what form, one can determine if there are any defects.

Using a large site crane, installers lifted the letters in pieces and welded them to the wall’s steel facade. Jones estimates that each letter weighs approximately 5,000 pounds, based on the steel’s 35-pound-per-square-foot weight and the fact that each letter includes an average of 120 feet of steel. The letters are spaced approximately 12 feet apart, and the tops of the letters actually extend above the wall by more than 3 feet. "D" is the largest letter, measuring 35 feet, 6 inches high by 25 feet, 4 inches wide. The remaining letters are 27 feet high with between 13 and 1/2- and 15-foot widths.

The next phases of signage

Signage installation began in mid-August and was scheduled for completion in mid-September. At presstime, the first phase of installation — the "Denver Pavilions" portion of the Great Wall’s signage — had been completed. Because of the time frame, however, no photos of the smaller, disc-shaped letters forming the word "Pavilions" were available. (We plan to show the next phases of installation in an upcoming feature.) Each disc for the word "Pavilions," measuring 6 feet, 4 inches in diameter, contains a 4-foot-tall aluminum letter, which is pegged off the aluminum disk with a return. To install the letters, YESCO attached a 2-by-2-foot frame behind each disk and welded it directly on The Great Wall’s wide flanges.

Phase two of the sign installation involved a series of aluminum banners, placed at ground level underneath The Great Wall. In all, twelve 40-foot-tall banner displays were installed in pairs — one perpendicular to the wall, and one parallel with it. The double-sided banners are decorated with digitally printed vinyl and act as a design element rather than as directional or identification signage. Mounted with custom-made C-channels, each banner has a 6-inch pipe spine for support. Aluminum panels are attached to the spine with structural steel studs.

In the final phase, YESCO installed the Welton St. sign, also in front of The Great Wall. The sign mimics the disc-shaped "Pavilions" letters, but is installed vertically rather than horizontally and is mounted to the side of the wall.

According to Bob Koch, YESCO’s project manager, the "Denver" sign installation was tricky because the crane had to reach over walkways. The sign company used CAD computer drawings to determine each letter’s centroid for accurate lifting and alignment. After all, when you’re installing 5,000-pound letters, it takes a little bit of luck and a lot of ingenuity — and this sign installation had plenty of both. 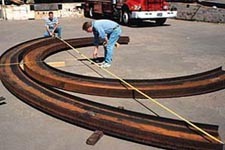