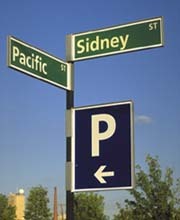 Editors Note: We asked Patrick Gallagher, principal of Gallagher and Associates (Washington, D.C.), and president of the Society for Environmental Graphic Design (SEGD) to define "wayfinding." His definition follows.

What is wayfinding? Wayfinding exists in many scales and environments. It navigates readers through a city, hospital corridor or airport, calls attention to a storefront, or provides information about an exhibit.

Wayfinding is essentially a succession of clues comprising visual, audible and tactile elements. The components of any visual wayfinding system exceed signs to encompass architecture, lighting, landscape and landmarks. Good wayfinding helps users experience an environment in a positive way and facilitates getting from point A to point B. When executed successfully, the system can reassure users and create a welcoming environment, as well as answer questions before users even ask them.

However, too much information can be as ineffective as too little. Developing a hierarchy of information is a critical component of wayfinding, with users being the primary consideration. The speed, visual environment and distance from which the information will be viewed are key considerations.

Less information on a sign can be read by a driver at 50 mph than by a pedestrian standing 3 ft. away. This may seem obvious, but consider how many times you’ve driven past a sign that bears more information than you could absorb. "More" is not necessarily better; even a well-designed program can get lost in visual clutter.

Wayfinding’s effectiveness also depends on typeface, font, size and spacing between letters and words. For example, a combination of uppercase and lowercase letters is easier to read than only uppercase. Color contrast is also essential for optimum readability.

Wayfinding is a system of information; therefore, elements of the system must be well maintained. A strategy and plan for maintenance is as critical to success as the design. And with ever-improving technology and new navigational tools like the Global Information System (GIS) and the Global Positioning System (GPS), a wayfinding element can be as small as a wristwatch.

In summary, an effective wayfinding program is designed to communicate information clearly and concisely. A well-designed visual communication system may be beautiful. However, it’s not art; it must answer a specific need.

Principal Clifford Selbert says the firm sought to reflect the school’s rich contributions to the community and world.

"I would characterize the graphic identity for University Park as whimsical," Selbert explains. "It’s practical, but I think it’s a lot of fun and doesn’t take itself too seriously. And, in keeping with MIT, it’s ‘techie’-oriented."

Paying homage to MIT’s well-deserved reputation for honing many of the world’s premier scientists, the firm created a wayfinding system for the site’s parking facilities using two design programs.

One design system employed elements from the periodic table, including hydrogen, helium and nitrogen. Designed with white lettering against a blue background with gold trim, the painted signs were fabricated from aluminum and painted with acrylic polyurethane.

Another garage wayfinding system, installed in a 550-car garage serving a 270,000-sq.-ft. facility on the premises, pays tribute to founding fathers of science and technology — Pasteur, Eastman, Montessori, Bell, Edison, Carver, Einstein and Curie. The signs comprise 1/8-in.-thick aluminum painted with acrylic polyurethane. They were screenprinted in a two-color pattern with vinyl text and mounted to the concrete walls.

For floor identification in the garage stairwells, Design Communications (Boston) constructed 1/8-in.-thick, 5 x 121/2-in. painted magnesium rectangular signs, each with raised text and Braille, with a screenprinted graphic of the scientist mounted to a concrete column.

Invisuals (Boston) fabricated graphics bearing the inventors’ countenances on the surface of each floor’s elevator door. The graphics were applied to 8640 Scotchprint™ vinyl. The 42 x 84-in. graphics were output on a 48-in. Scotchprint 2000™ printer. Metallic aluminum letters pin-mounted to the walls next to the elevator accentuated the graphics.

Design Communications also produced porcelain enamel signage with four-color-process, halftone screenprinting on a manual press, according to Michelle Brown, Design Communications’ project manager. The signs, brake-formed on a CNC system, took three weeks to fabricate. Once completed, they were adhered to outdoor-grade plywood backing and screwed into the wall surface.

In addition to the wayfinding the firm has completed for its parking facilities, Selbert Perkins spearheaded a consortium that created "Traces." An outdoor graphic program, "Traces" recounts the history of the area, from its days in early American history as marshland where the Natick Indians cured their fish, to its first industrial usage in the early 20th century when Simplex Wire and Cable housed a large manufacturing facility, to its current incarnation. Images of the site’s heritage and historical quotes are sandblasted into the park’s granite walkways, dimensional stone sculptures and concrete pathways. 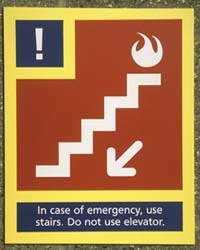 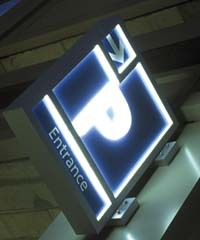 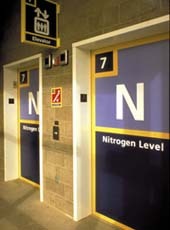