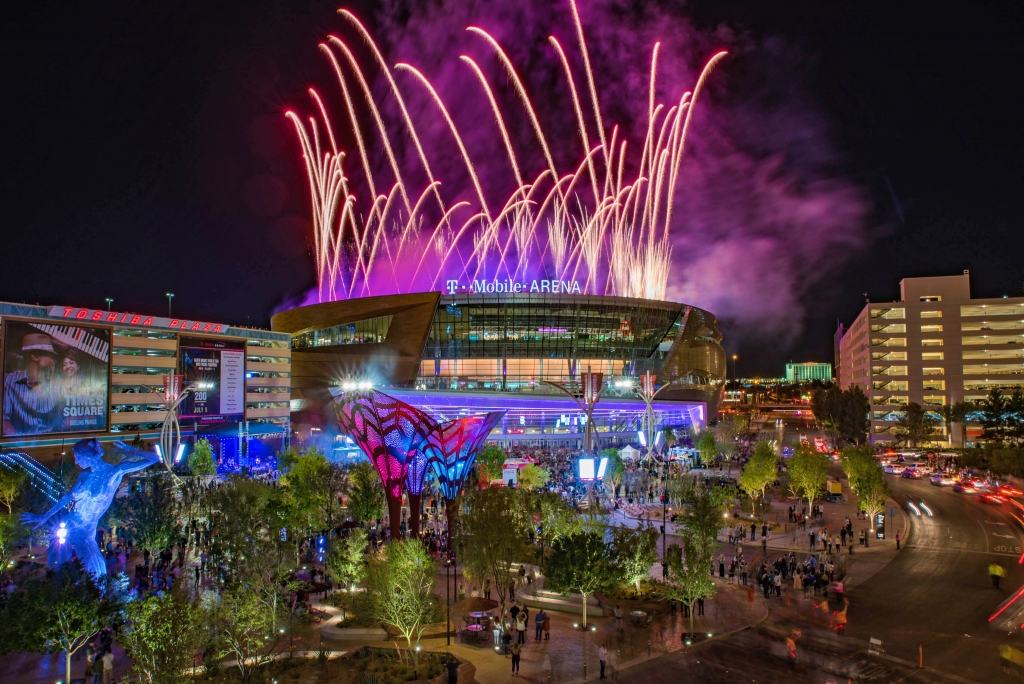 Standing out amidst the glitter and growth of the Las Vegas skyline is a tough job. But the recently completed T-Mobile Arena has risen to the challenge. The elegant, copper-laden, elliptical-shaped structure graces the south end of Las Vegas, jutting out between the New York-New York hotel and casino and the Monte Carlo resort.

And with seating for 20,000, the multipurpose, state-of-the-art live performance space has become a big player in the city’s entertainment scene with more than 100 events on its schedule, including boxing matches, hockey games, and the upcoming University of Nevada, Las Vegas/Duke college basketball matchup and the Professional Bull Riders World Finals tournament. Plus, it’s already played host to performances by the Harlem Globetrotters, The Killers, Garth Brooks, Dixie Chicks, Janet Jackson and The Rolling Stones.

The T-Mobile Arena is a joint venture between MGM Resorts International and Anschutz Entertainment Group (AEG) and was designed by Populous (Kansas City, MO), a global architectural design firm. With its copper cladding, the venue’s façade wraps the arena’s elliptical form with undulating bands of metal that evoke the desert mountains behind it. And its front-of-building video screen and public plaza are a natural fit with Las Vegas’ emerging, futuristic cityscape.

CHANNELING THE T-MOBILE ARENA
To ensure its elegant presence is clearly marked, the arena’s exterior roof signage can be seen from street level or when flying over it. The arena features several monumental closed-face channel letters that were all designed, fabricated, assembled and installed by YESCO’s Las Vegas division over a period of four months. A double-faced pylon was also included within that exterior sign package. Further digital signage was also deployed throughout the arena space. Finally, perched above the arena’s main entrance is a 200-ft.-long Daktronics full-color LED display with a see-through video screen promoting its current events.

A host of channel letters grace the exterior, including two roof-edge arena identification signs, and an installation on the center of the rooftop. “The arena’s channel letter sign fabrication began at the Las Vegas YESCO sign shop where the letters were cut and shaped from aluminum sheet metal into their final forms,” explained YESCO project manager Richard Kirsch. The final assembly, 100 ft. in length, comprises 10-ft.-high uppercase capitals (T, M and ARENA), 7-ft.-tall lowercase letters and internal backlighting via OSRAM Sylvania BoxLED Plus (at 6500k), which was inserted within each letter before it left the signshop.

The final channel letters were transported in sections, with each letter fabricated in two or three segments prior to final assembly. Once at the arena, the sign segments were lifted to the roof’s edge, then mounted and bolted as full letters to a steel subframe holding them vertically in place. In this installation, the steel subframe’s base consisted of a series of flat plates installed on the roof, which transferred the signage weight from the rooftop onto the building’s structural supports. “Once the letters were assembled on the steel frame, the previously installed LED modules were all linked together with quick connects allowing us to jump from letter to letter in connecting the full LED electrical system for the rooftop sign,” Kirsch said.

T-Mobile’s magenta brand color dominates each sign. “All the channel faces were made with white Lexan, with each letterface covered with a custom-made, 3M-processed, magenta-colored, opaque, perforated vinyl overlay. The channel letters were also painted magenta to match the magenta vinyl. With the perforation in effect, the channel letters were magenta during the day and white at night,” Kirsch said. T-Mobile Arena’s first roof-edge sign is directly over its front entrance facing the Strip. Its second identical closed face channel letter sign is located on the opposing roof edge directly facing I-15 and its oncoming traffic passing the back end of the arena.

T-MOBILE FLYOVER
The third channel letter roof set was placed flat on its back on the center of the roof. It’s intended for air traffic flying over the arena, including passenger jets and media helicopters telecasting a rooftop cut-away shot during big arena events. It can also be viewed from surrounding hotels, guaranteeing that travelers know exactly where the arena is. To extend viewing opportunities, the rooftop letters are twice the size of their companion channel letters at 20 x 14 ft., for a final assembly length of 200 ft.

The process of fabricating and populating each channel letter with its LEDs was identical to the assembly of the other two arena roof-edge signs. Because of the distance of the sign’s location from the roof edge to the center of the roof, there was no crane immediately available with a long enough boom to lift the letters from the ground to the roof center. In a brute-force effort, the rooftop channel letters were lifted by crane to the rooftop edge then hand carried from the roof edge to the installation spot where they were positioned and bolted in place at the center of the rooftop. To make the letters easier to view, they were encircled by a perimeter of Philips ArchiPoint iColor translucent dome lights that create an accented magenta halo around the rooftop sign at night.

PYLON PROMOTION
To expand the T-Mobile Arena’s promotional presence, YESCO planned to erect a roadside pylon behind the arena facing oncoming I-15 traffic. Once they’d demolished an existing pylon, YESCO began construction of the T-Mobile Arena pylon: a set of vertical poles supporting a double-faced, full-color LED display with a 25mm pitch (at 30 ft. tall x 60 ft. wide). Mounted over the video screen was a 77-ft., double-faced cabinet sign with backlit pan channel letters the same color as the roof-edge letters.

To further the branding, the front entrance is covered with a Daktronics LED display, which appears opaque to external viewers, but transparent to guests standing behind it on the arena’s mezzanine level. This effect was developed to complement the arena architecture, explained Daktronics sales manager Jim Vasgaard: “The T-Mobile Arena’s front façade was designed with a big, beautiful glass wall that lets a lot of natural light into the front arena lobby, making it a more inviting gathering space.

The video screen, as called for in the T-Mobile specification, had to cover the arena’s front façade’s glass wall with a full-color, solid-looking image and still be transparent enough to allow the daylight to pass through the LED screen and illuminate the interior lobby space. With the LED screen in play, its content is divided among upcoming arena event promotions, sponsorship promotions and limited third-party advertising.

“To create the transparent effect of the LED video screen, Daktronics used a linear, free-form, ProPixel LED stick (PSX-5700) with a 50mm pixel pitch,” Vasgaard said. “In completion, the final LED display offers a 9,000-sq.-ft. LED video screen (43 ft. high x 209 ft. long) with a 50% transparency factor. Because the front lobby window area took on a trapezoid shape to properly fit the LED screen against the arena’s glass façade, the LED ProPixel sticks were attached in front of the arena’s lobby windows with aircraft cables that were stretched across the window area and carefully tensioned, pulling the cables and their attached LED sticks taut to properly fit the arena’s curved window shape.”

Then, there was also the challenge of keeping the arena’s windows clean amidst blowing desert dust. Because the “cable screen” was situated in front of the arena windows, its cabling was designed to be flexible enough to allow the LED screen to be moved away from the lobby glass so window cleaners had enough room to do their job.

GAME ON
With its booming event schedule, fans have a lot to look forward to at T-Mobile Arena. Toshiba Plaza, a 2-acre public gathering space adjoining the arena, is perfect for hanging out before events. Meanwhile, the 200-ft.-long video mesh screen facing Toshiba Plaza keeps visitors informed of upcoming events and sponsorship promotions. And visitors can stay connected while they’re inside the arena thanks to state-of-the-art Wi-Fi. Post-event, fans agreed that a good time was had by all – and that is a sign worth bragging about.