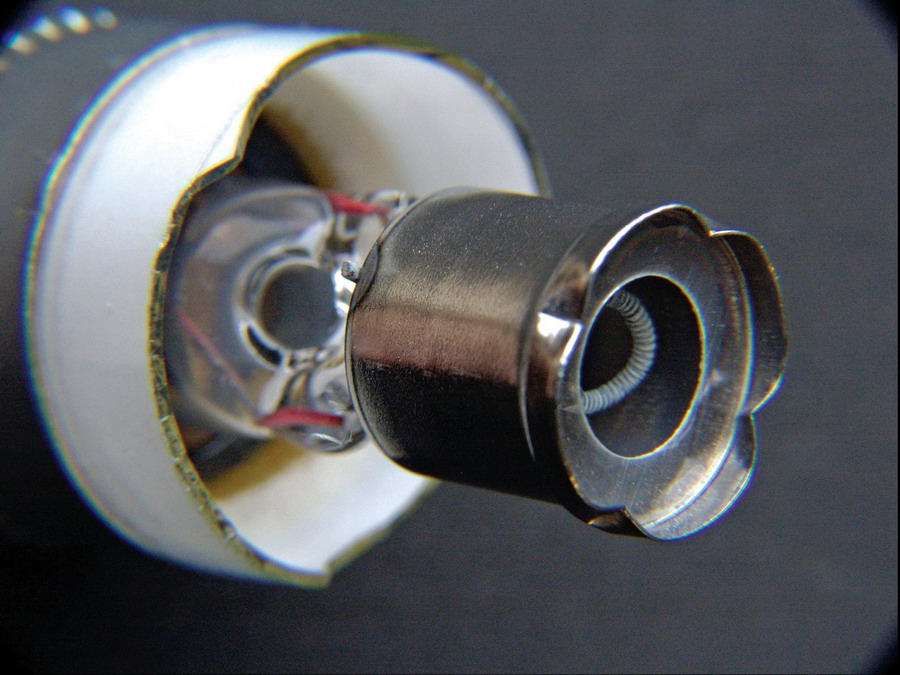 The first predecessors of today’s fluorescent lamps, offered in the 1930s, were a cross between an argon-mercury-filled neon tube and the Cooper-Hewitt lamp (a medium-pressure, mercury-arc lamp, in which pools of liquid mercury served as electrodes). It added a bluish light source to incandescents’ reddish light, without using high voltage (to save transformer/ballast costs), and high currents, while incorporating a gas discharge, which was exactly what lamp designers needed.
A neon tube, in comparison, would’ve required an excessively large electrode to accommodate the power needed to produce the same amount of light as the early fluorescent tube.
The predecessor of the fluorescent-lamp electrode – the “tungar” rectifier that has recharged accumulators since the early 1920s – can operate on low voltage and high current, while incorporating a gas discharge, which was exactly what lamp designers needed.
Thus, the electrode was based on thermal emission (it was hot while it operated); it comprised a tungsten-coil filament coated with alkali-earth oxides. The voltage drop at the electrode could be reduced to 12 to 15V at an operating current of 300 to 800mA, at 0.5-in. wide and 0.25 in. long.
To operate the lamp directly on 110V mains, using a simple choke or a tapped choke as a ballast, the lamps required a large diameter (38mm, or 1.5 in.) and short length (approximately 2-3 ft.). Because the argon/mercury gas mix emits only a pale-blue light, the first lamps always required incandescents to be installed with them to achieve a useful spectrum.
We’ve known that fluorescent materials can convert invisible UV light into visible light since the 17th Century, but the 1934 annual Osram report didn’t mention the use of fluorescent material in low-pressure, mercury-vapor discharge lamps yet (see also Footnote 1 on page 40 of the 1935 edition of Samuel Miller‘s book Neon Signs, McGraw-Hill, New York).
The use of fluorescent materials for lighting evolved with the development of cathode-ray tubes for TV receivers, where a “white” image was desired. However, the whites used for the first fluorescent lamps in the late 1940s weren’t natural. Also, the zinc-beryllium-silicate mixture that contained the yellow component was quite toxic; it created a hazard when inhaled after lamp breakage.
The next step was to increase the light output and reduce the toxicity. In the 1950s, halophosphates came into use, and they’re still found in many low-priced, “standard” whites. In the 1990s, triphosphor, rare-earth fluorescent materials were introduced, and they elevated not only the color-rendering index up to 98 (100 being ideal sunlight, 2 the yellow sodium light, 50 to 70 white standard LEDs; standard triphosphors yield 94 to 96), but also the efficiency from 70 lm/W to approximately 125 lm/W.

The long-life lamp
Roughly 20 years ago, a company patented the “long life” fluorescent lamp, which, due to a different electrode design, could claim approximately 30,000 to 70,000 operating hours (standard fluorescent lamps normally achieve 5,000 to 12,000). After the patent expired, many lamp manufacturers began offering long life lamps with similar technology. The life of the filamentary electrode is extended by preventing the emission coating or base metal from being displaced by sputtering (as a result from the impinging ions).
Three changes contributed this achievement:
1. Reducing the electrical field in front of the electrode by placing the electrode at one end of a hollow metal body (the “Faraday shield”). The absence of the electric field inside the metal slows the ions; thus, impingement transfers too little energy to displace the material.
2. Preventing ions from directly colliding with the filament by placing a massive metal bar in front of the filament in the direction of the tube or hiding the bowed filament behind an insulating mica ring. The heavy ions will travel only straight ahead and, thus, collide with the metal bar instead of the filament (or shoot right through the center of the mica ring), while the lightweight electrons are easily deflected into the tube axis.
3. Changing the thickness of the emission coating. The coated, thermal, filament emitter deteriorates with time via the evaporation/decomposition of the alkali-earth oxides in the coating. To prolong life, there must be enough reserve.
Thus, the filament design was slightly changed (double- or triple-coiled solenoids) to hold more emission material than normal, single coils can.

Mercury reduction
In the late 1980s, 30 to 50mg of mercury was needed per lamp (assume a standard 40W T8). Now, 2 to 3mg are sufficient. During lamp operation, when mercury (in the form of vapor and plasma) penetrates the layer of fluorescent powder on the inside of the glass tube, it is absorbed into the glass via diffusion. Thus, over time, the available mercury is depleted. To compensate, enough reserve mercury must be provided for the lamp’s lifetime.
A barrier layer between the fluorescent powder and the glass prevents the mercury from being absorbed by the fluorescent materials and the glass. Consequently, even for today’s long-life lamps, the amount of mercury (and, thus, the environmental hazard posed by improper disposal) is reduced by at least a factor of 10.
The lead content was reduced also by the European RoHs directive, which mandated stems (the electrode glass parts) comprise lead-free glass.

The bigger the better?
In principle, yes. Roughly 15 to 20 years ago, the fluorescent-lamp market changed. For a simple ballast construction, the lamp-operating voltage had to be kept low, which led to a large lamp diameter of 1.5 in. (T12) or, later, 1 in. (T8). Transport and storage of these lamps proved problematic, and, in some fixtures (especially furniture and shop-fitting applications), the large lamp diameter ruled them out. For low-power lamps (4 to 8W), a short tube can be a smaller diameter. The 16mm-diameter T5 lamps use a low current of only 170mA. With the development of electronic power supplies, which can sustain a higher operating voltage than the mains, higher power T5 lamps proliferated in the early 1990s.
Besides the high-efficiency (HE) series (with up to 110 to 115 lm/W), the high output (HO) series converts up to 80W on a 1,450mm length. T5 lamps won‘t start at ambient temperatures lower than 59° F. To achieve high efficiency, a condensation point (read “coolest point”) of the lamp must be defined. The electrode stem at the stamp side is longer than the one on the other side, which means the electrode sits further into the tube. A cold spot will likely develop behind the electrode.
For vertical tube installation, because heat rises, always place the stamp side at the lower end of T5 lamps. The operating temperature of this spot should not exceed 95° F.
Thus, for a sign application with a wide, operating-temperature range, the T8 type is still the best choice. For cold climates, special types with double-glass jackets (like a Dewar flask) are available. They permit operation, with practically no light loss, even below 0° F.

The future – tubular LEDs?
In the past two to three years, different manufacturers (mostly from Asia) have offered LED-based, “fluorescent lamp replacements,” which simply could be exchanged for existing fluorescent lamps without altering the fixture. Practically all of these products that I’ve checked have been inadequate and don’t rectify the term “fluorescent replacement.”
In some cases, the claimed, reduced electrical consumption could be confirmed – at a much higher rate of light-output reduction than the savings over conventional fluorescents. Today’s LEDs can’t (practically) achieve a fluorescent lamp’s 90 to 120 lm/W efficiency. The best, standard-production LEDs achieve 48 to 70 lm/W. Also, LEDs can‘t be recycled, and their manufacturing process produces much more hazardous waste than fluorescents, for the same lumen output.
“Fluorescent lamp replacement” LED tubes don’t perform well in most fixtures designed for fluorescents because of their radiation characteristics. The fixtures were designed to reflect and diffract the emitted light evenly around the whole circumference of the fluorescent lamp, whereas the LED tubes radiate only in one, primary direction. The opaque LED tubes represent nearly a cosine square (“Lambert”) radiator. Thus, the light levels of direct and indirect illumination completely differ.
Lastly, the color rendering of most LED tubes is so bad (because of the often-discussed fact that most white LEDs’ light contains only blue and yellow components) that human beings don’t feel comfortable in this light. For this reason, LED tubes aren’t suitable for use where human beings are present for prolonged times, and they’re not suitable for backlighting or illuminating digital prints or translucent vinyl, because they render most sign colors badly. The renowned Austrian lamp manufacturer Zumtobel recently issued a release that said it doesn’t recommend replacing fluorescent tubes with LED tubes.
In summary, the tubular fluorescent lamp still is, and will be, for a long time, the most efficient and economical white light source for sign applications.