Grant Freking Signs of the Times May 2021 Issue

DIGITAL PRINTING IS A constant source of coverage for Signs of the Times, but the last time this segment of the sign-age and graphics industry garnered a feature-length piece was in November. At that time, the COVID-19 pandemic still held a firm grip over the industry. We contacted sign and graphics companies, print shops and manufacturers to gather information about a range of digital printing topics, including trends, products, tradeshows and more — all through the prism of COVID-19. Thankfully, half a year later, the world, and the sign and graphics industry, look different — and for the better.

Though many sign businesses were forced to adapt and/or change their typical output in 2020 in order to survive — see the proliferation of COVID- and healthcare-related signage — the industry’s resolve remained strong. Companies are back to producing the same small-, medium- and large-sized jobs they completed for clients pre-COVID. And though some manufacturers halted or postponed the release of newer, more advanced digital printers around this time last year, a fresh injection of new machines, new technology and new ideas has rejuvenated the digital printing realm over the past half-year.

This development appears to stem from manufacturers seriously taking into account their customers’ requests. The wishes from sign companies, print shops and graphics producers alike are for more speed, more efficiency and more sustainable elements (among other characteristics) to be integrated into their digital printers. Manufacturers have delivered, and in turn, companies now have a bevy of new machines to choose from as they continue to output striking projects. 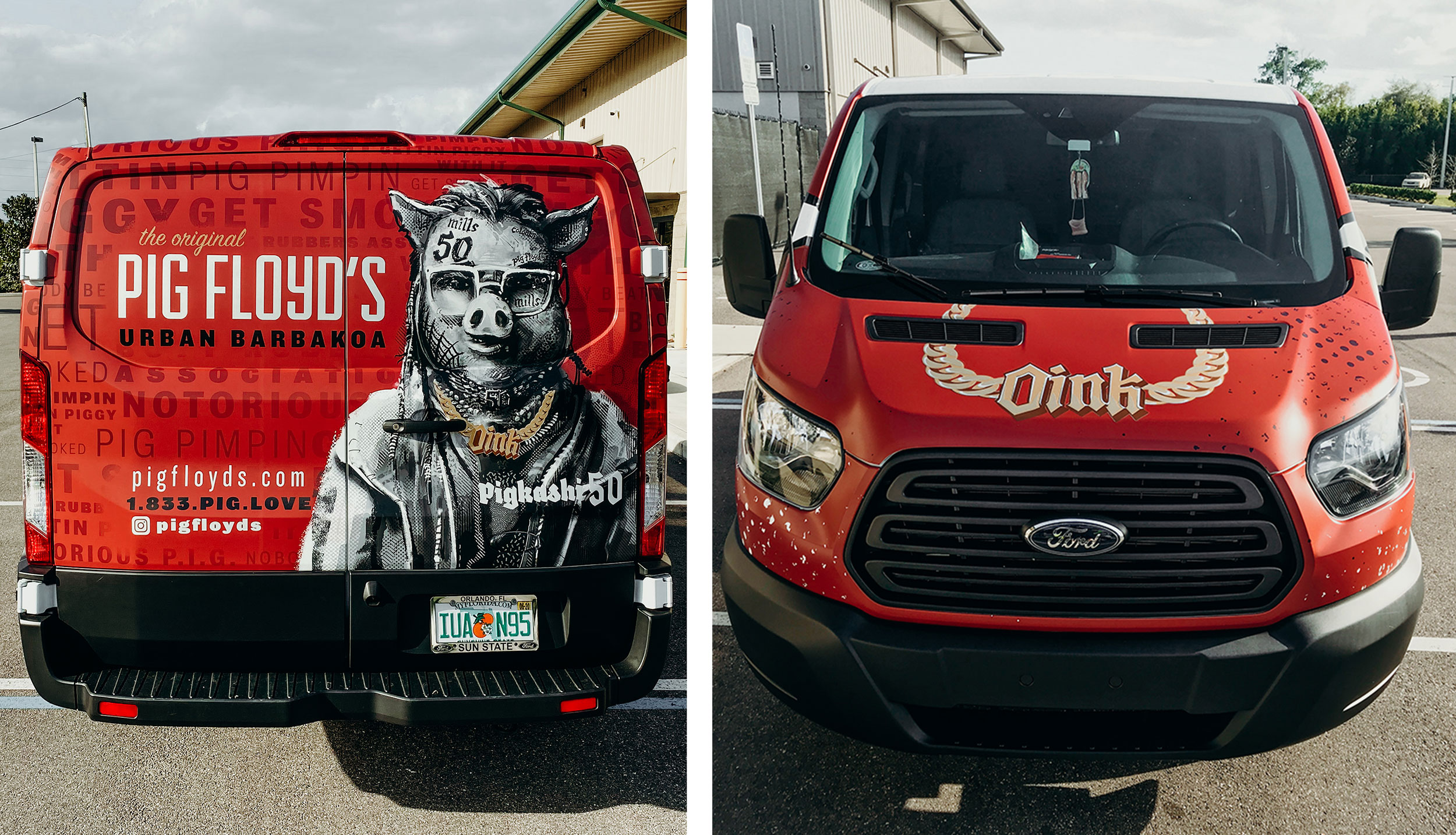 For Gabriel Boy, managing partner of Fresh Ink Signs + Graphics (Orlando, FL), the most important part of digital printing lies “in the middle of efficiency and sustainability.” He added that trust in the machine is a must. “We live in a market that is ever-evolving … so it’s important for us to count on our machines with reliability and keeping our environment in mind.” One of Fresh Ink’s more recent projects was a vehicle wrap for Pig Floyd’s Urban Barbakoa in Orlando. Lead designer Christian Stanley designed the entire wrap, including a custom, hand-drawn graphic for the rear of the van. The wrap was processed on a Roland DGA VersaArt RE-40 eco-solvent printer, with Boy noting that Fresh Ink is in the market for additional printers to “keep up with demand after COVID-19.” 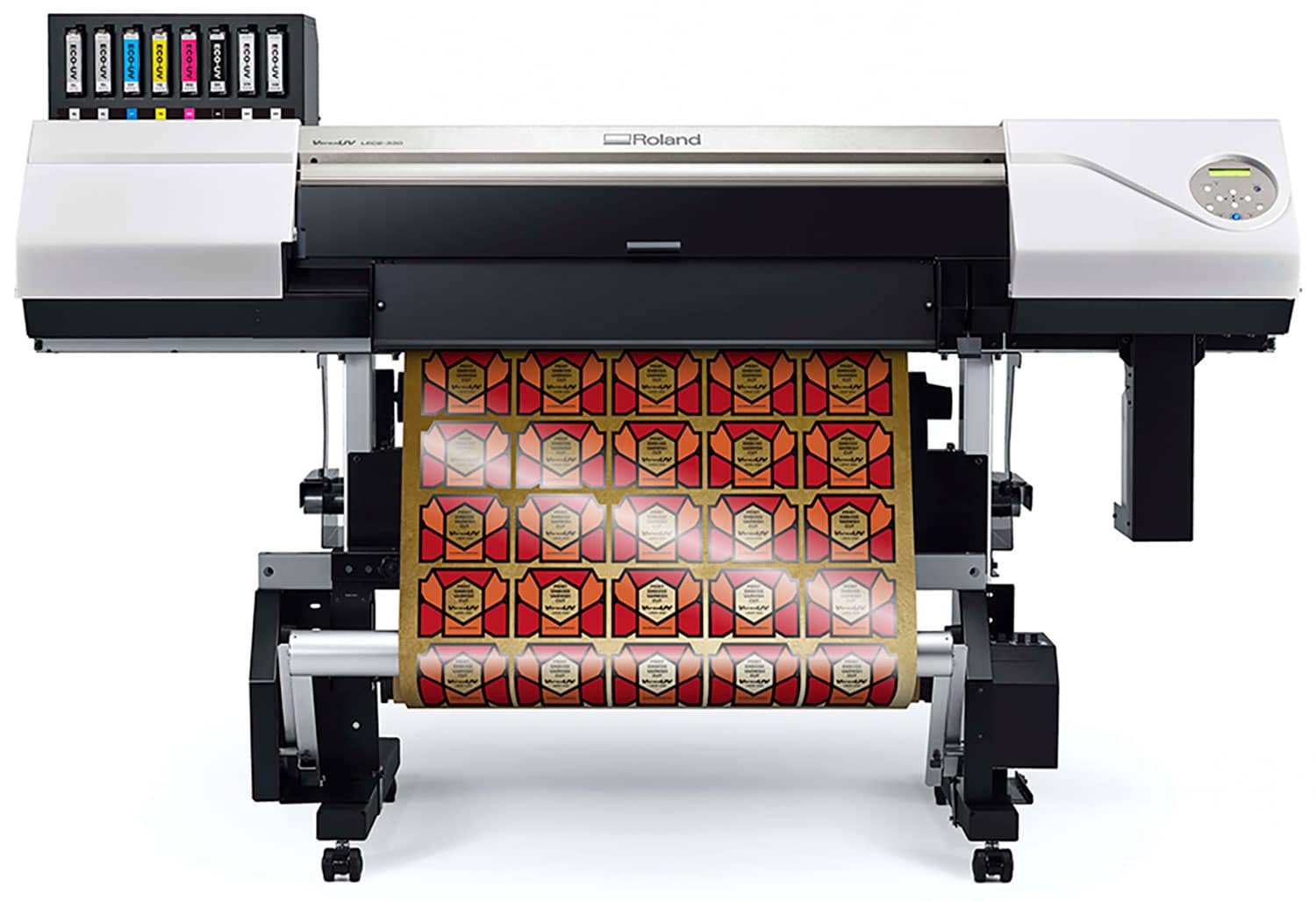 As for Roland, not long after the new year, the manufacturer launched a pair of new UV printer/cutters, the 64-in. VersaUV LEC2-640 and 30-in. LEC2-330. The former is designed for larger signs and displays, with the latter for label and packaging applications. The introduction of larger, more powerful LED lamps in these two machines equates to higher print quality, improved color saturation and faster ink curing. Image quality was a focus with the inclusion of new GREENGUARD Gold-certified EUV5 ink available in CMYK, Clear, White and Primer. Combined with Roland’s new True Rich Color II print setting, the inks reportedly widen the color gamut and deliver crisp graphics. The company also touts the VersaUV LEC2-640 and LEC2-330’s affordability and ease of use, seemingly checking all the boxes for would-be buyers.

For the Swish project in Indianapolis, Repro Graphix digitally printed the work by local creatives like Boxx the Artist (top) and Tasha Beckwith (below), and installed it at the Indianapolis International Airport.

Repro Graphix (Indianapolis) recently produced and installed over a dozen 12-ft.-tall temporary murals of local artists’ work — many of whom lost income during the pandemic — at the Indianapolis International Airport in time for the NCAA men’s basketball tournament. (The entire tournament was held within the state of Indiana, and most games were played in Indianapolis.) Repro partnered with the airport and the Arts Council of Indianapolis to play their role in Swish, a city-wide program that provided tournament tourists with artistic and cultural experiences to celebrate college hoops in Indy.

According to Caroline Hall, business development and marketing at Repro, the company had to “divide and conquer” the tight turnaround time and the “immense amount of output needed, all while running our regularly scheduled work.” Repro relied on their Canon Colorado 1650 (a UVgel machine) and a trio of HP Latex printers (365, 570, R2000 Plus) to keep them on schedule. Much like Fresh Ink, Repro seeks reliability and the ability to reduce its environmental footprint. “There’s nothing more crippling and frustrating than when a machine goes down or isn’t outputting the quality we count on,” Hall said. “Beyond that, we also geek out when equipment evolves in an eco-friendly aspect!” 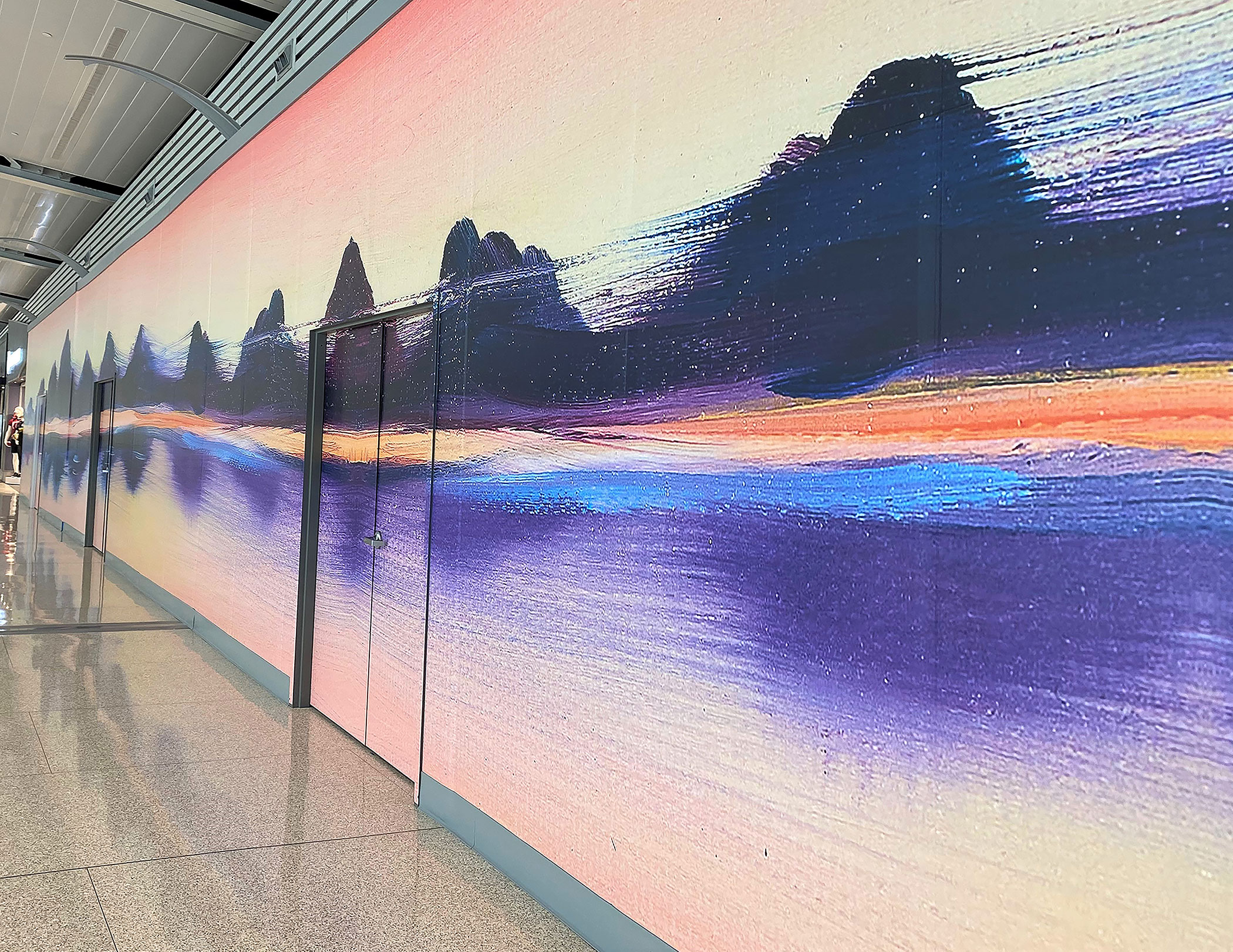 The new Latex line introduced by HP earlier in 2021 — the HP Latex 700 and 800, and the HP Latex 700W and 800W — has sustainability components that jive with the priorities of companies like Repro. HP’s in-house research concluded that 85% of PSP customers desire sustainable products and practices, leading HP to insert its HP Eco Carton in all four printers. This cartridge is made out of cardboard, reducing plastic use by 80%. The printers also use HP’s water-based inks, which are more eco-conscious. 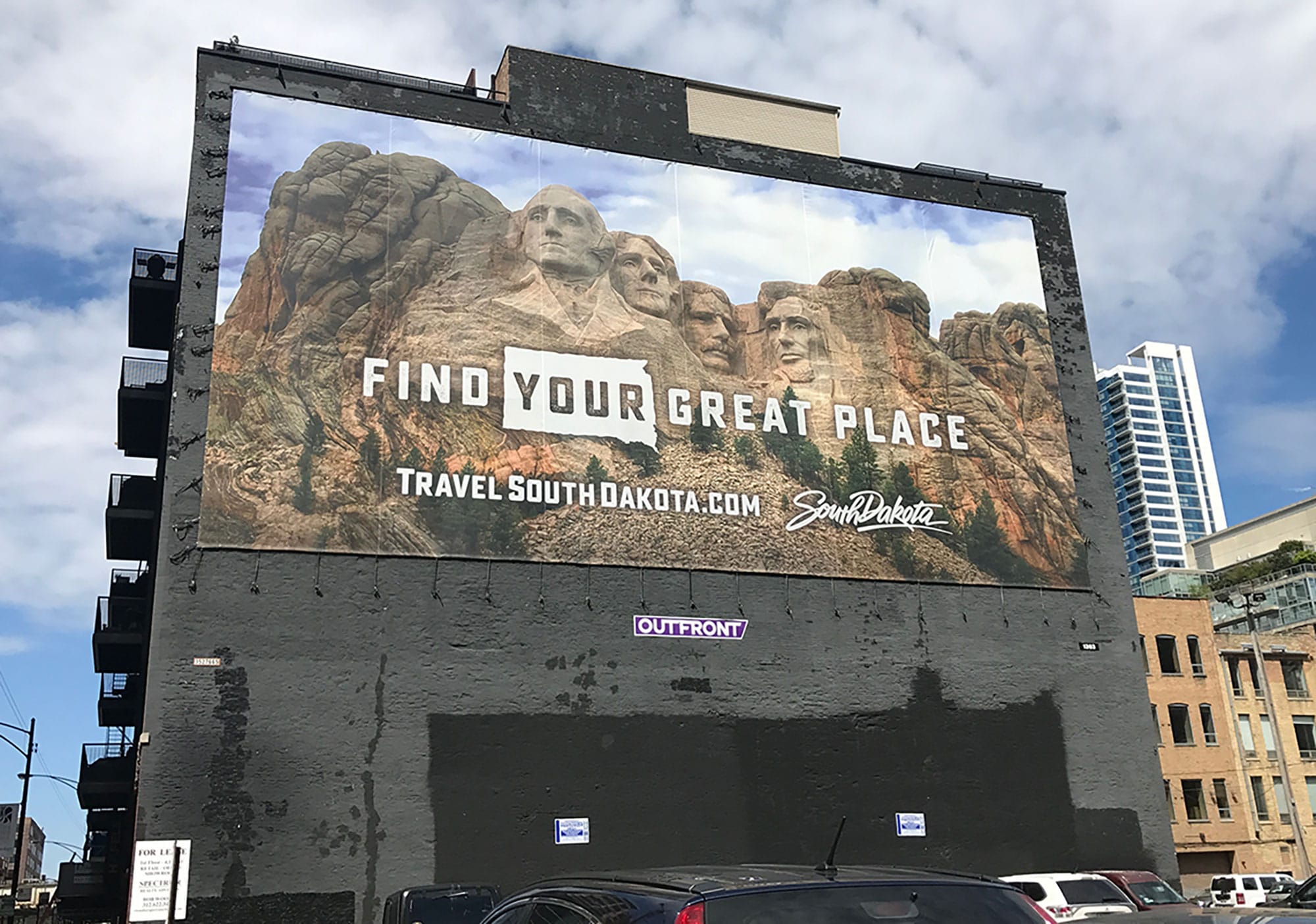 Independent’s Service Co. has a fleet of large-format printers to process media for out-of-home spectaculars, like these two billboards (above and below).

At press time, many of the new machines released by manufacturers simply haven’t had enough time to reach their new customers for a range of reasons, but at least one has: EFI’s new VUTEk Q5r. Independent’s Service Co. (ISC; Hannibal, MO) is the first US-based company to get its hands on the 198-in., roll-to-roll colossus. The large-format printing company’s relationship with EFI dates back to the ’90s, and prior to its acquisition of the Q5r, ISC employed three Matan five-meter printers, two EFI VUTEk 5r+ machines and an EFI 3r+. The Q5r is taking the place of a soon-to-be-retired Matan.

ISC wanted to add the Q5r’s speed and new ink capabilities to its portfolio of large-format machines. “Our EFI VUTEk platform allows us to serve both out-of-home and indoor graphics with the highest durability and quality in the market,” said Allan Atkins, ISC’s vice president of sales. “That gives us a tremendous competitive advantage.”

EFI’s VUTEk Q5r made its US debut at Independent’s Service Co.

The VUTEk Q5r was released in January along with another roll-to-roll, UV LED printer designed for super-wide signage and graphics markets: the VUTEk Q3r. Both machines have the speed ISC and other companies covet, with the Q5r processing prints up to 7,233 sq. ft/hr. and the 138-in. Q3r printing as fast as 6,006 sq. ft./hr. Color customization is also on the menu, with both printers featuring up to nine ink colors (CMYK+LcLmLk+white+clear coat) and EFI’s UltraDrop Technology, which packs true resolution up to 1,200 dpi and a green-friendly component, consuming less energy while using thinner, heat-sensitive substrates.

3D printers have been around for a number of years now, but are still making waves in the digital printing sector via the uniqueness of their output. Look no further than Media Resources’ (Oakville, ON, Canada) billboard project for Branded Cities, an out-of-home media advertising company that serves clients across North America.

Canadian company Media Resources was able to add 3D ‘foliage’ to this billboard for Branded Cities.

Media Resources printed and installed the 30 x 60-ft. vinyl flex banner that served as the background for the 3D-printed ‘foliage,’ which was produced by the company’s Massivit 1800 3D printer. According to Media Resources Director of Marketing Omi Sahota, the company was tasked with producing three separate ‘foliage elements,’ a single flat leaf (30 in. tall), and two leaf clusters with beans (one 64 in. tall, the other 78 in. tall). The foliage was made from CNC foam, hard-coated and then painted. The ‘100% Ethically Sourced Arabica Beans’ letters were die-cut, pegged and attached inches off the surface of the background.

When pressed on which elements of digital printing technology are essential to Media Resources, where 3D printing is a key division of the company, Sahota said, “It all comes down to efficiency, specifically speed and costing. You really start to notice a price increase depending on the level of finishing required on the 3D project.”

Apparently manufacturers don’t believe their customers’ appetite for more speed, increased reliability and additional sustainable features in their digital printers is too much to whet. In turn, sign, print and graphics companies can keep churning out the unique, impressive digitally printed projects we had all gotten accustomed to seeing pre-pandemic. It’s good to be back.

A sampling of other recently released digital printers of interest to signmakers, graphics producers and PSPs. 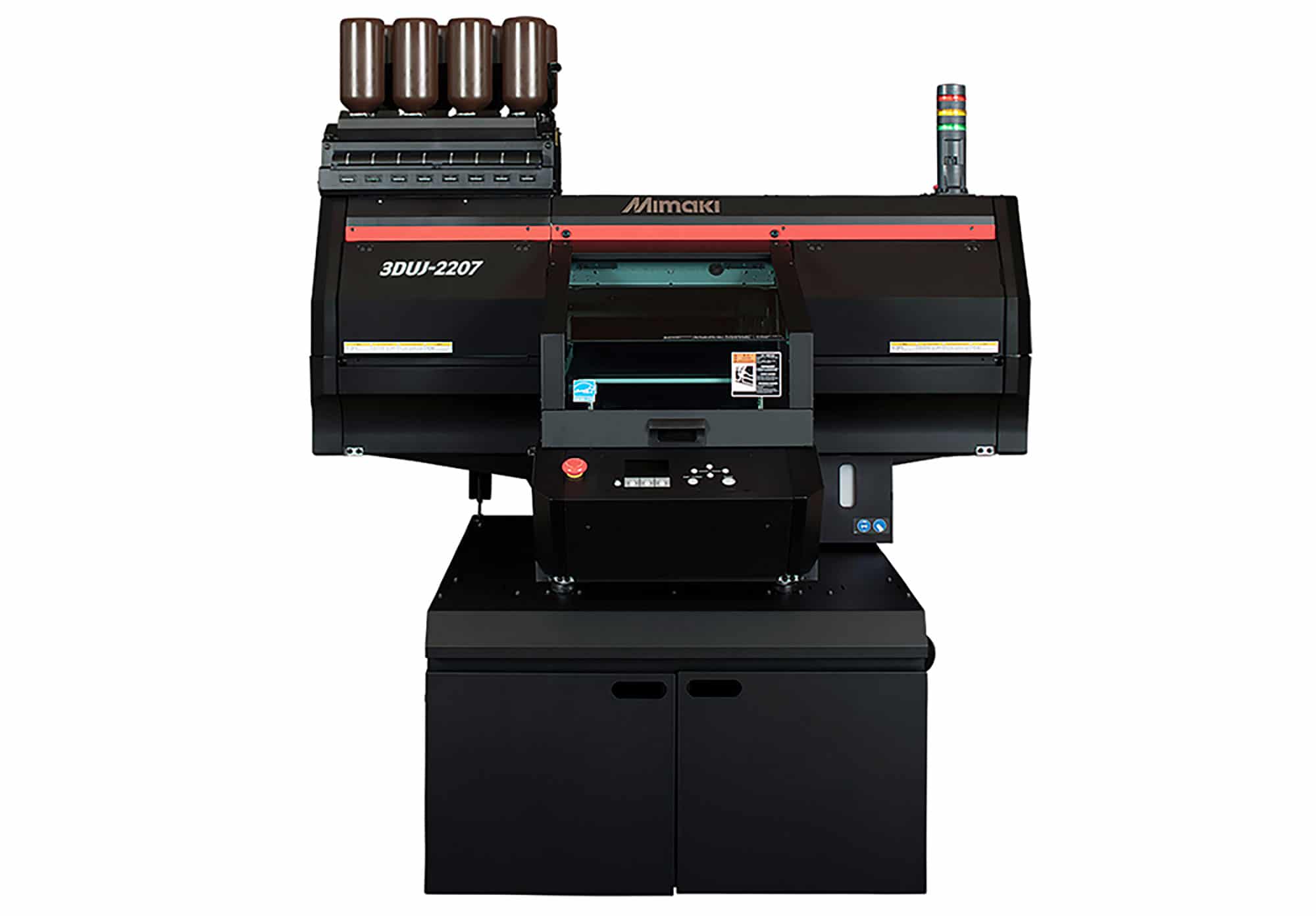 Mimaki USA Releases New 3D Printer, Textile Machines
Late last year, Mimaki USA announced the 3DUJ-2207 (above), a UV inkjet 3D printer that is a more compact version of its bigger, industrial-scale counterpart, the 3DUJ-553. The 3DUJ-2207 was designed for office environments with its 8 x 8 x 3-in. build space, quiet production and optional deodorizer, all critical components of Mimaki seeking to reach a new 3D-printing audience with this machine. Mimaki has also released two new inkjet printers with the textile and apparel markets in mind, with the TS100-1600 sublimation transfer inkjet printer and the Tiger-1800B Mk III. The former is for entry-level users, with a new Dot Adjustment System that offers automatic alignments and frees up the operator. Also new is one-liter bottled ink, which reduces running costs by about half when Mimaki compared performance to its conventional models. 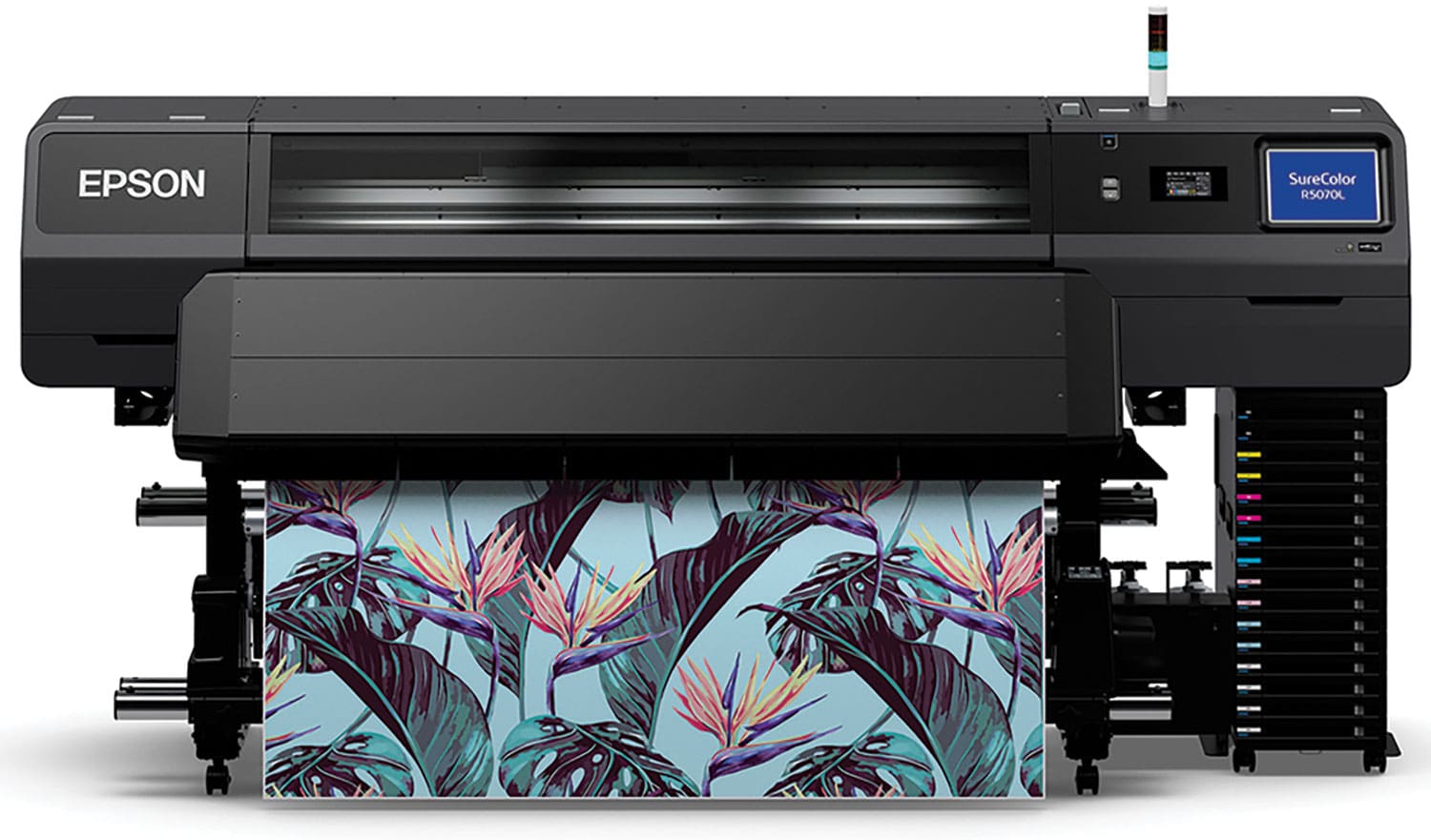 Epson Goes Resin, Adds New Flatbed
Epson America changed up its roll-to-roll game by introducing the SureColor R5070 and R5070L (above) , the company’s first signage printers with multi-purpose, water-based resin ink. The 64-in. machines have 1.5L ink packs for increased efficiency, and the R5070L has 3L per color with hot swap technology, meaning the printer can automatically switch from an empty ink pack to a new pack mid-print. The entry-level SureColor V7000 is a flatbed printer designed with signmakers in mind. This machine is built on versatility and reliability, with its production aimed at churning out outdoor signage and promotional signs. It can print on a range up substrates (foamboard, wood, acrylic, metal and more) up to 3 in. thick, and can produce color or three-layer prints with a marginal difference in production speed.

The Mosaica Group Adds to Panthera Line
A new industrial digital dye sublimation printer was launched by The Mosaica Group: the Panthera JR (above). This 6.2-ft. machine processes media up to 1,900 sq. ft./hr. The company said the JR is designed to be a more affordable version of the original Panthera S4 models, and its roll-to-roll feeding system reduces paper waste. Higher productivity is also on the menu, due to fewer cleaning and maintenance requirements.

The Office, Branded: 3 Spaces Come to Life with Gripping Graphics