Now you see it, now you don’t! I’m riding in a subway car, gazing out the window when, suddenly, like a hallucination, an animated advertising scene flashes outside my window. It’s not my imagination. Outdoor advertising has found a new print direction — subway in-tunnel advertising.

A low-tech approach to subway displays in subway tunnels, in-tunnel advertising relies on a scientific phenomenon known as "persistence of vision," which allows humans to see animated or moving pictures. In this process, a continuous strip of slightly varying pictures is transferred to a film strip. When the film is projected, the mind records each image as a continuous movement.

The concept of in-tunnel advertising was inspired by a zoetrope. Approximately two-and-a-half years ago, Submedia’s founder, Joshua Spodek, reminisced about the early 19th-Century optical toy that spun a picture strip inside a circular frame.

As Spodek played with one, he wondered if the animation process could be reversed, with people moving past static images arranged in a straight line, rather than images flying past immobile viewers. Spodek said, "I wondered, where could you do this? And I thought, subways!"

In Submedia’s subway-tunnel advertising system, film is replaced by a continuous series of light-box displays, each holding a slightly different image. Instead of sitting in a theater or at home watching images projected on a screen, subway passengers move past display boxes and see a brief commercial.

The beauty of this system lies in its simplicity — no electronics, flashing lights, sensors or moving parts, except for the passing train. Spodek observed, "It’s a natural environment for our kind of advertising, because you have a captive audience of thousands of passengers who are looking for something to do. Our light boxes captivate their attention. And the really good part is that there are more city-transit riders each year."

Each display unit comprises a 3 x 3-ft., backlit lightbox, a fluorescent light source and ballasts. Because the boxes are placed in the subway at window height, an advertisement of 15-30 seconds requires approximately 200 display boxes placed side by side between two subway stations.

Speeds above 5 mph generate a moving image. At approximately 35 mph, the frame rate (averaging 200-300 frames per second) produces a high-resolution display that’s approx- imately 10 times sharper than television. Although the installation of a single display system within a subway tunnel averages approximately nine days, a change-out from one ad campaign to another takes slightly under two hours.

The Submedia business model resembles that of above-ground billboard advertising companies, which enumerate sign placements and viewers. Submedia fabricates and installs (at no cost to the host city) the display boxes and advertising placements. The company earns its revenue from advertising charges and shares that with the host transit authority.

Furthermore, Spodek says, "The beauty of in-tunnel advertising is that it’s not a replacement revenue, but a totally new revenue stream for subway transit authorities."

Spodek has ridden on MARTA subway cars to observe passenger reactions to Submedia displays. "It’s been overwhelmingly positive. When passsers-by first encounter a Submedia in-tunnel display, there’s usually a big gasp from the passengers, and many applaud. We’ve certainly created a buzz of anticipation with our displays and the MARTA commuting public."

Looking out the window, he thought, "What a waste, they ought to put billboards on the walls. People are already staring out the windows. Why not give them something to look at? Our display system uses potential advertising space that was previously unused and presents a memorable way of advertising that captures the public’s attention."

Recalling children’s flipbooks, in which slightly different images on each page are flipped to impart movement, he investigated the potential of transferring the flipbook concept into a tunnel-advertising system.

Rather than using lightboxes, Walker’s company mounted an incandescent front light over a metal frame placed on a tunnel wall. The frame runs the length of the advertisement, enclosing several hundred digitally printed images (printed on 3M Scotchprint) running side by side for a 20-second promotion. "We prefer the use of our wall-mounted metal frames because we want our system to be as flexible as possible, as sometimes there’s not a lot of space in these tunnels."

The 1.8 x 2.2-ft. average frame size approximates that of a 35-in. television screen so that clients who have previously produced television commercials can easily transfer video frames from their commercials to a SideTrack display for immediate application. Walker said, "We chose our frame size to be similar to a television screen so that our clients’ initial adaptation to our display would be easier. This way they can use already existing film content in our displays."

When enough trials are completed, and transit authorities worldwide become comfortable with in-tunnel advertising, the process will give new meaning to the "light at the end of the tunnel." Sign display media has found a new home. 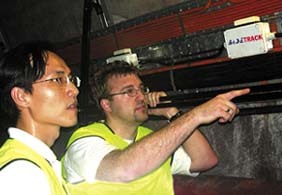