Polycarbonate’s (PC) advantage is its great strength. It withstands wind and abrasion much better than acrylic. Understandably, that advantage also carries a higher price tag.

PC’s drawback is its tendency to yellow and degrade under UV light. However, plastics chemists have improved PC topcoatings, which has helped remedy the problem.

PCs absorb, and then outgas, moisture. Manufacturers often recommend drying PC in an air-recirculating batch oven for at least one hour prior to thermoforming or graphic application. This procedure helps remove the sheet’s internal moisture. Vinyl applied over insufficiently dried PC will trap outgassed moisture, which causes bubbles.

After drying, prep the surface with water and a mild, nonabrasive cleaner. Because the PC is softer than most plastics, it’s susceptible to scratching, so clean it carefully. Don’t use any solvents — although PC is strong, it’s susceptible to subsequent stress-induced cracking. Avoid using brushes, squeegees or other cleaning devices that could scratch the sheet’s surface. After washing the surface, rinse with clean water and dry with a soft cloth to prevent water spotting.

Polystyrene is a cost-effective option for interior retail signage and promotional displays. It’s also a popular screenprinting substrate, because it’s smooth and printable with various inks. Unlike polypropylene and polyester, no surface treatment, topcoating or special preparation is necessary before printing.

Styrene outgasses, and summer heat can exacerbate this condition. In many cases, outgassing breathes through permeable film.

A more complex styrene formulation, polystyrene is more stable and less prone to outgassing. Nevertheless, it won’t work outdoors. I investigated a vinyl-graphic failure several years ago where styrene was the substrate. The sign was mounted inside a bus-shelter enclosure with southern exposure. As heat built in the tight confines, the sign cooked and formed gigantic bubbles in the applied graphics.

There’s only one reason anyone would use polystyrene outdoors: It’s cheap. The cost of replacing the sign once it’s abused by outdoor conditions won’t make using polystyrene worth your time or money. Avoid it altogether for exterior signage.

Corrugated plastic boards, such as Coroplast 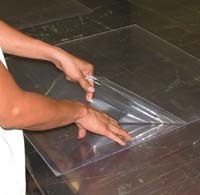 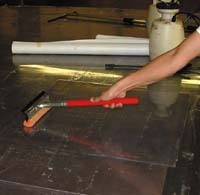 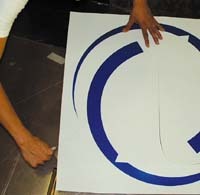 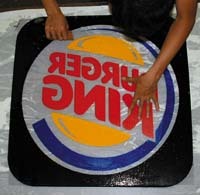 Related Topics:February 2009January 2006Vehicles + Vinyl
click to Comment(Comment)
Up Next

A Bright Future, Part One