SINCE 1993, THE Anaheim Ducks — originally founded as the Mighty Ducks of Anaheim by The Walt Disney Co., and based on Disney’s 1992 film The Mighty Ducks — have played in the National Hockey League. The club has made the playoffs 14 times, winning six division titles and taking home the Stanley Cup in 2007. Entering the 2020-2021 season, the Ducks received a custom, LED-lit hockey puck sign in the ceiling of their expanded, renovated locker room.

The sign serves both as functional light as well as team inspiration. Eric Russell, general manager of Sunset Signs and Printing (Anaheim, CA), which designed and built the sign, summed up the priorities.

“Budget and timeframe were not the driving issues — quality and craftsmanship [were].” Sunset Signs conceived of a custom hockey puck precisely 44 times the size of an official puck. It uses both face-lighting and halo-lighting on the gold and black logo with orange trim. The sign was set into a recessed soffit built specifically for that purpose.

Because the puck measures 11 ft. in diameter and needed to fit through a standard door, it was constructed in three separate pieces and assembled on-site. Russell believes that making the sign appear seamless was perhaps Sunset Signs’ greatest feat on this job. Tricks the signshop used included a matte finish on the puck and positioning the seams to be perpendicular to the entryway to make them less noticeable. Mechanical fasteners on the underside join the pieces together. 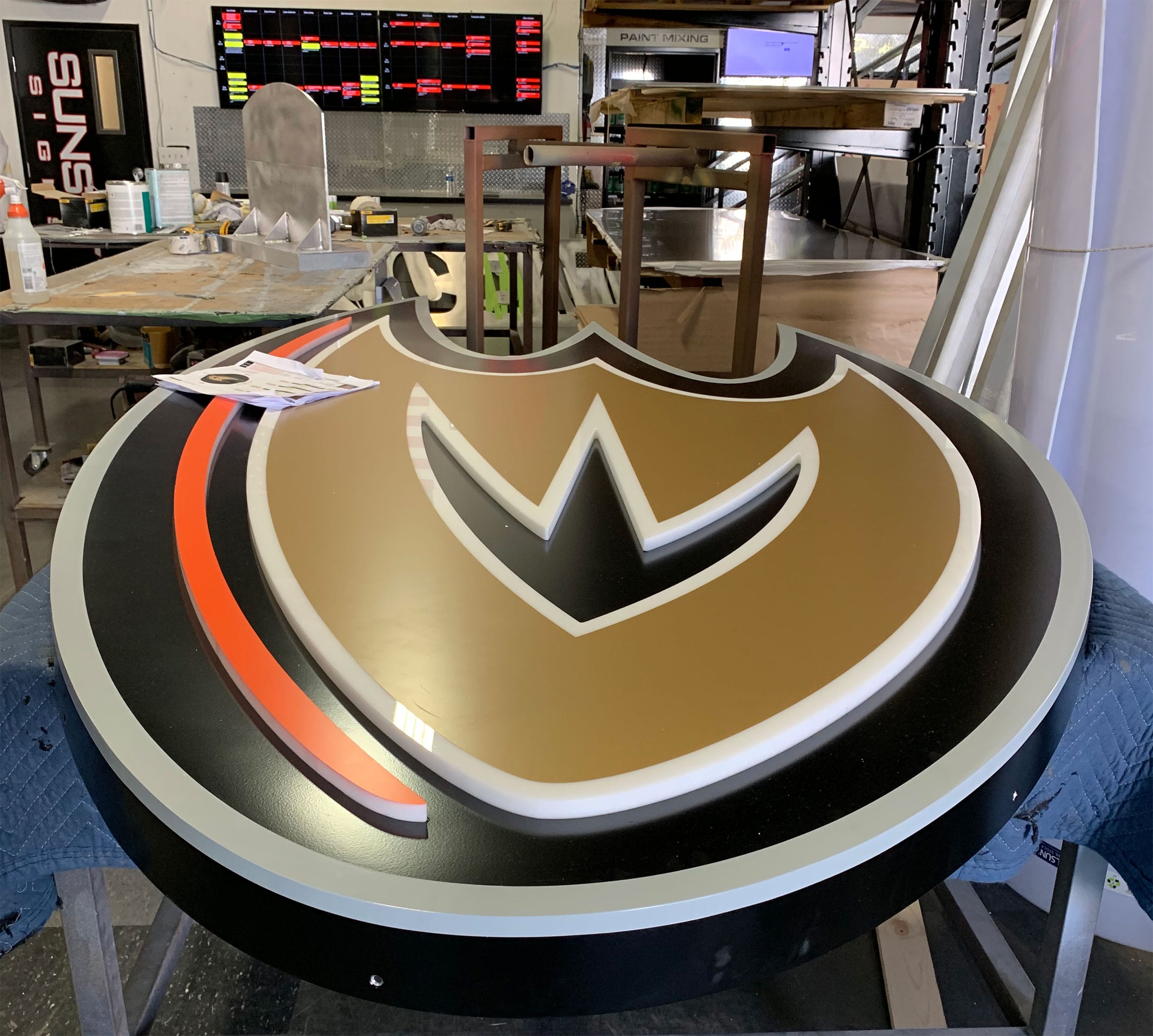 Black matte paint and layered lighting give the puck its dynamic appearance.

The sign base was CNC-routed in aluminum, then sanded and painted satin black. On the signface, push-through acrylic brings the logo to life and a transparent, orange vinyl-on-Lexan back achieves the dual-lit effect. Warm, white LED modules in the logo were chosen to match the color temperature of the room’s lighting fixtures, while cool white halo-lighting makes it stand out from the blue-painted soffit. The final touch on the locker room sign involved etching the words “ANAHEIM DUCKS HOCKEY CLUB” on the side of the puck where “OFFICIAL” would normally appear. Russell said that preparation is central to any sign project. “In the design phase, it pays to think ahead to the smallest details of fabrication and installation to ensure the highest-quality sign can be delivered on-time,” he said.

The new sign and expanded locker room are just the beginning of a larger investment in the team and community by the Ducks’ current owner, the Samueli family. A $3 billion, 115-acre mixed use entertainment and community district for visitors and locals alike, slated to be completed in 2024, is being constructed alongside the Ducks’ home, the Honda Center.

Laura Peters is a full-time freelance writer who specializes in technology topics including LEDs and their many applications. Laura was previously senior technical editor of LEDs Magazine, editor-in-chief of Semiconductor International and has over 20 years of experience working in semiconductor manufacturing. Contact Laura at [email protected].