Many signmakers avoid vehicle wraps like the plague — and with good reason. These applications challenge the skills and patience of even the most experienced installers. If you haven’t tried one of these applications, I recommend getting some training from an experienced fabricator.

In August, I took a trip for that purpose. I spent two days learning about vehicle wraps from experts at cast-film manufacturer Arlon (Santa Ana, CA) and service provider Straight Line Graphics (Huntington Beach, CA). Read on for tips and tricks that should make these applications less challenging.

Why be a wrapper?

Vehicle wraps can be time-consuming, difficult and expensive. So, why produce them? Because a full vehicle wrap is almost impossible to ignore, and, when done properly, becomes effective fleet advertising. When operated in a large city, each wrapped vehicle is seen by millions of people. Compared to other, similar forms of advertising, such as outdoor billboards or transit advertising, the cost per visual impression can be significantly less.

If you use the right film, vinyl vehicle wraps are less expensive to apply and easier to remove than painted graphics. Full wraps also protect the paint system from dents and scratches caused by flying rocks and other road debris. If the vehicle is totally covered, simply remove the vinyl, and, voilá, a brand-new paint finish conceals any telltale image ghosting that occurred after having applied computer-cut lettering and symbols.

Some design rules for outdoor advertising and transit advertising are also relevant for designing vehicle wraps. The cardinal rule is to keep the design simple. Customers tend to want to cover every inch of the vehicle with numerous different advertising messages.

Your job is to convince him otherwise. Limit the words to a maximum of six. Use a legible typeface, and incorporate bright or contrasting colors to attract attention.

"If the fleet owner is providing the artwork, specify the software, file extensions and the resolution required to blow up a design to a full-size print in terms of dpi," Chuck Bules, Arlon’s technical-services manager, said.

When determining vehicle-copy position, avoid such obstructions as door hinges, indentations, handles and compound curves, if possible. It’s best to locate text on such flat surfaces as the vehicle’s sides, hood and trunk. If you stretch the copy across a flaring, front-quarter panel or bumper, the lettering will likely become distorted, which hampers visibility. In many cases, it’s easier to apply cut or printed lettering as a separate step after wrapping is complete. Avoid busy backgrounds that can distract the viewer’s attention from the primary message and design elements.

"It’s much better to select lighter colors for backgrounds, such as a picture of clouds, sandy beaches or ocean water," Bules says. "Fuzzy backgrounds, with less defined points of alignment, are much easier to match, when joining graphic panels. You have much less room for error when you join panels with deep colors and highly defined images."

"After a few vehicle wraps, I realized that my trusty, gold squeegee wasn’t the best tool for the job. It tended to scratch the film, and it wasn’t flexible enough when I was working the film into tight corners and around compound curves," Bules said.

Felt and Teflon® fluoroplastic squeegees are now his tools of choice. Felt squeegees are available in various densities, and in rectangular and semicircular shapes. Dense, felt squeegees with a sharp edge provide the pressure you need when stretching a film into an indentation or crease on the vehicle’s side.

Bules cautions that felt squeegees are only effective for dry applications. Wet felt disintegrates quickly. Bules also prefers the "kinder, gentler" Teflon squeegees (he is, after all, a Californian). The Teflon squeegee’s slick surface glides smoothly over the vinyl without scratching it. Its stiff edge provides great pressure, which helps when pushing out hard wrinkles and edge puckers.

Most professional installers prefer propane torches. For a vehicle wrap, a heat gun, which generates temperatures up to 400° F, is much safer. The less-intense heat diminishes the chance that you’ll damage the graphic.

Other practical implements for your toolbox include an air-release tool, a tape measure, 1- and 2-in. masking tape to tack the graphics in place while laying out the job, an Olfa® knife with breakaway blades, paper towels, solvent surface cleaner and denatured alcohol.

When installing graphics onto compound curves, you’ll need to stretch the vinyl. Problems can start here, because vinyl naturally tends to revert to its original shape.

"After several installations, you’ll find that you can stretch the film to more than three times its original length," said Bules. "Just because you can, doesn’t mean you should."

The same holds true for the ink. When ink thins out, it becomes transparent, and the color washes out. For this reason, the vinyl you choose must exhibit outstanding performance characteristics.

In the United States, many professional installers prefer cast films with cast-vinyl overlaminates. Cast films are generally very conformable and have excellent durability. Let the buyer beware, though — all cast films aren’t the same. Research your material options. Find out what other sign people use.

Calendered films are another option — today’s films are more conformable and less bulky than older-generation media. In Europe and other parts of the world, signmakers usually use them.

The signmaker must determine the best vinyl for a shop’s needs. If in doubt, conduct your own tests on some cast and calendered samples. Just remember, you usually get what you pay for. Trying to save a few dollars by using a cheaper vinyl will usually cost you in the long run. 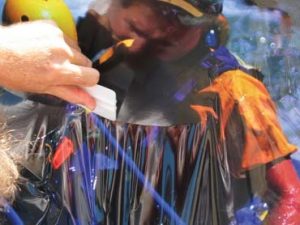 Related Topics:November 2005Vehicles + Vinyl
click to Comment(Comment)
Up Next

All Wrapped Up and Someplace to Go